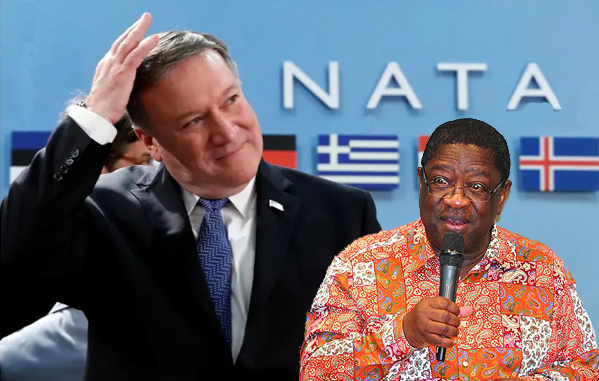 Monday Kenyan Amos Wako was denied entry into the US by Mike Pompei, US Secretary of State. Reason: corruption.

Wako was Kenya’s Attorney General, today a Senator. Among his many alleged offenses: using his powers as Attorney General to stifle his political opponents. Makes me wonder: Sen. D. Trump from the Great State of Alabama? He does have a property there, right?

Our illustrious Secretary of State Mike Pompeo made the decision then issued this statement:, “Today’s action sends a strong signal that the United States is a valuable partner in Kenya’s fight against corruption.”

Wako, like Sessions or Barr, is not a remarkable character in the panoply of il-got politicians. There are many Kenyans who laud the man for among many potentially good things he did during his twenty years as Kenya’s attorney general.

It’s a role unique, it seems, to attorney generals. Justice Richard Goldstone imposed brutal sentences under apartheid in South Africa as its Chief Judge of the High Court. He remained Chief Judge under Mandela and helped implement all the laws necessary to transition to an anti-apartheid regime.

The reason these judicial individuals straddle radically different political systems and survive– even flourish – is because, theoretically, they are bound to the letter of the law. They aren’t moralists. They’re fundamentalists. They don’t originate anything. They simply remind everyone what has already been originated.

This idea worked brilliantly for Wako. His list of stellar awards, accolades and executive positions includes being an expert on OAU’s Human & People’s Rights committee, to an honorary life member of the Wilsthire Bar Association… while working pro bono for the YMCA and Boy Scouts.

To implement, “The Law.”

Ah-hah. The law. That languid miserable dictum defined by 7000 pages of many multi-syllabic words peppered with occasional ancient language.

You can understand why Wako has been elected a Senator even as he remains under investigation in Kenya for local corruption charges that could put him behind bars at any time. There are so many investigations into Wako’s thwarting prosecutions of mobsters, failing to implement Parliamentary laws, graft and outright embezzlement, that unweaving the criminality from the realities of the past is mind-boggling.

We ordinary folk just don’t have time to do that! We’ve got to file our taxes!

We know that the system is rigged against us! Probably against Wako!