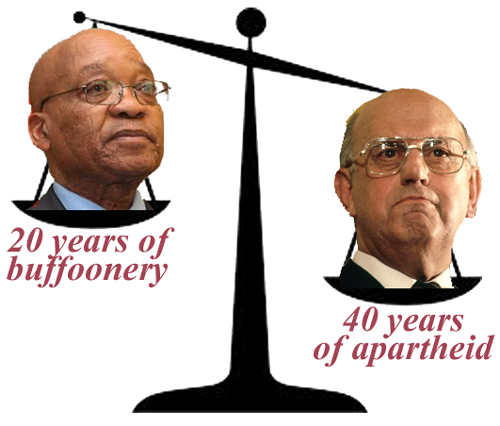 In three weeks South Africans will likely reelect the ANC to power, but it will also likely be the last time.

Standing for a second term, President Jacob Zuma, wouldn’t have a chance in most any other open democracy. His playful life style and his list of scandals would doom any earnest candidate in any place but South Africa.

In fact in his last two political rallies he was booed, and people in the audience started throwing stones at cars.

So why will he prevail?

Twenty years since the end of apartheid memories of white rule during the oppressive years of apartheid still run strong. Apartheid began with the Nationalist election victory in 1948, and the insidious laws that began implementation in the early 1950s. That was more than 40 years of politics that was arguably worse than Zuma, today.

So it is remarkable to think that the ANC might not have the staying power that the apartheid regime had.

The ANC knows it’s in trouble. In fact, ANC candidates have pledged if they can wrest control of the Western Cape (Cape Town) – which is extremely unlikely – that half of all white civil servants will be immediately fired.

This play on racism marks the desperation of the failing ANC, and Zuma’s ineptitude in particular. It’s typical of banana republics like Zimbabwe, not of mature democracies of the sort South Africa can be.

It hinges on the belief that “you had your 40 years of oppression, we now get ours.”

To be fair ANC officials at lower government levels seem to be doing a decent job. It’s the heavies at the top like Zuma who are creating the aura of buffoonery. And the old adage that all politics is local is also a significant reason that the ANC is expected to win, again, this time.

But their support is dwindling, and with Mandela gone, and with the years clicking by, the end of the ANC can be imagined. The next national election will be in 2019. I expect the ANC will lose, then, unless the antics of their leadership change radically.

Or as many suggest, a palace coup takes place that ousts the old revolutionaries for the technocrats being produced, today.

The South African president is not directly elected by the populace, but by the lower house of parliament. The process is nearly identical to the election of America’s Speaker of the House.

A party convention that disapproved of a sitting president would likely be sufficient for that person to resign or face a humiliating election whipping by his comrades. The magic number being bantered around for Zuma’s survival is 60% or more of the May 7 votes for the ANC. Less, pundits say, and Zuma’s out.

It’s going to be close.