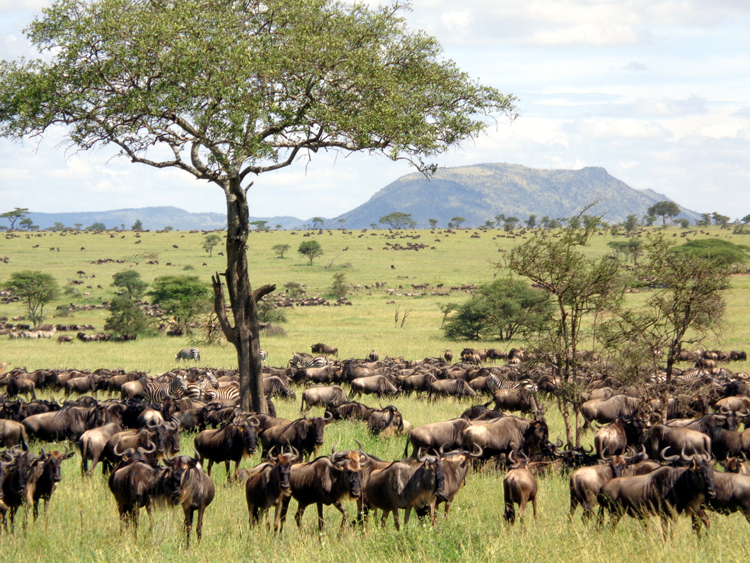 My final safari of the season in Tanzania gave us an extraordinary picture of the beauty, majesty and drama of the rainy season.

For this is the rainy season. While there continues to be a lot of misinformation about “short rains” and “long rains” (an appropriate Kenyan differentiation that doesn’t exist in northern Tanzania), April is always a month of rain.

May is often heavier, and then the spigot turns off in June.

This is my favorite time for East Africa. It’s amazing how so many tour companies and guide books suggest this isn’t a good time to visit: ask my clients for 40 years! Here are some of the pluses for visiting at this time of the year, all of which we just finished experiencing:

But never with the span that we witness in April. This safari was in the migration for nearly six hours of steady, not slow travel, as we moved from Lemuta to Ndutu. The next day we continued in a different area north of Ndutu, the Kusini Plains to Hidden Valley, and the wildebeest were solid every inch of the way.

That only happens, now. When we then went atop Naabi Hill and used our binoculars to sweep the southern grasslands, it was clear we’d only seen a tip of the iceberg. What we saw from Naabi would fill two or three Maasai Maras.

2. Youngsters
Wildebeest calve starting at the end of February. Most other animals calve year round, but we saw hundreds if not thousands of baby zebras, gazelle, giraffe, buffalo and impala. It makes perfect sense. The veld is at its most fulsome in the rains. This is the easiest time to begin raising offspring.

3. Scenery
At one point I held 26 different wildflowers in a bouquet in my hand. Every color and shape imaginable. The grasses, too, were bountiful and glorious. Many of the acacias were blooming. The baobabs were all in leaf. At certain points in the veld, the yellow biden bidens wild flower had exploded over everything! It was magnificent.

4. Dramatic Landscapes
Three of every five days the afternoon around 3 p.m. was punctuated with a magnificent storm. Now oftentimes we watched it but weren’t under it. In the tropics, storms don’t move consistently and rapidly as they do in the temperate zones.

Unusual morning storms never disrupt our game viewing because we simply go where they aren’t forming. And I often scheduled intense game viewing in the morning packing a picnic lunch that would last 7-8 hours before the afternoon storms would begin.

But with brilliant skies unfettered by buildings or tall mountains, our front row seats of the power of nature over the magnificent African veld is an unmatched experience.

5. Climate
Hardly ever over the mid-eighties during the day and wonderfully crisp and cool at night with … no dust!

To be fair, there are good points to every different season in East Africa, just as I imagine you would ascribe to your home. We do have to plan extra carefully in the wet season, and single vehicle safaris cannot enjoy the wide freedom of itineraries possible for them in the dry season.

But never let someone tell you “don’t go in the rains!”

They have no idea what they’re talking about and certainly have never experienced it themselves! 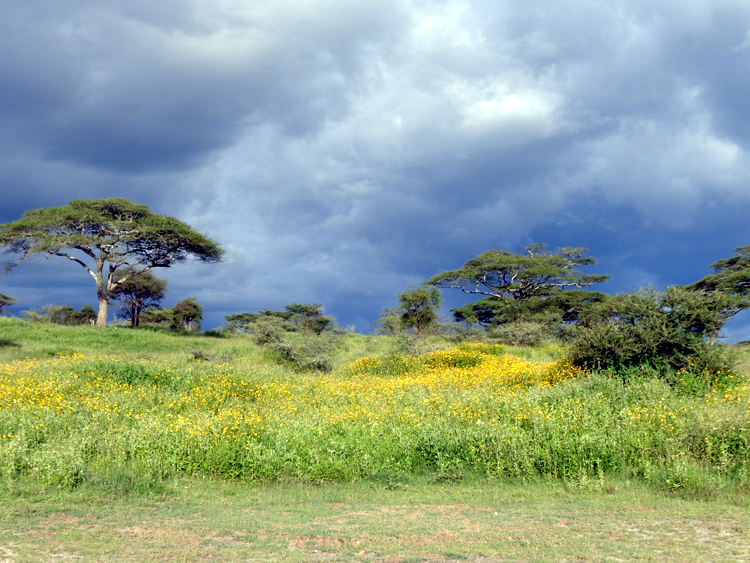