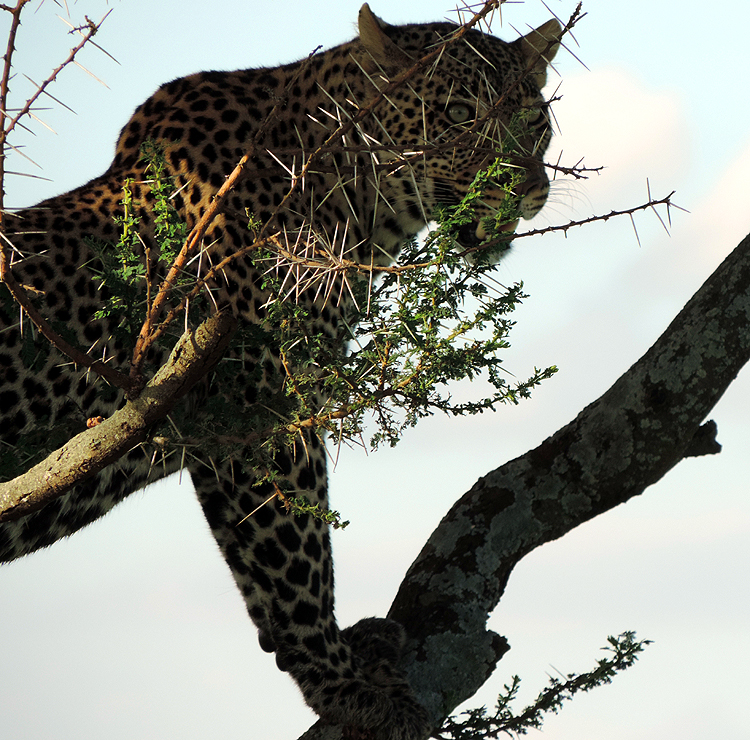 This safari is spending six fantastic days in the Serengeti, traversing it from bottom to top, and guess what’s dominating game viewing.

Lions, leopard and cheetah of course, and with no surprise as the Serengeti is probably the best place in the world for big cats. See Chris Kordash’s photo above.

But what was a surprise is the close second: elephant.

I’m beginning to rethink the “elephant problem” after our experience in the Serengeti and the Crater. I’m convinced now that the ele are acting as if poaching has increased substantially.

While we were at Ndutu, Howard Buffet was, too. He was announcing a $24 million grant to the Tanzanian government for increase elephant anti-poaching efforts, including a new helicopter and the requisite training for rangers to use it.

A day or two before, when we were in the crater, I counted 107 very large all male elephants collected on the western side. Although their tusks were not as big as the old tuskers that came down to the crater in the 1970s and 1980s, they were among the larger of today’s.

It was clear they weren’t acclimated yet to the crater, or to each other. I didn’t see them on my last safari, and I’m sure they weren’t here last year. So this is a relatively new development, quite contrary to normal elephant behavior, and almost identical to what the big tuskers of the 1970s and 1980s did.

The crater is not a good place for elephant, because there isn’t a lot of browsing; it’s almost all grazing. But the 1970/80s elephants learned to live with it and were protected from poaching by the unique geography of the crater.

The elephants we saw were fighting, as big bull elephants are wont to do. The old tuskers don’t fight, anymore. They’ve learned to live with one another, and I suspect that’s what will happen with the current crew.

I continue to be very critical of much of the media’s reporting of elephant poaching, however. (Please see my numerous previous blogs.) Recently, for example, Emily Kelting in the Huffington Post misstated the total number of elephant by several hundred thousand and continued the scandalous suggestion that in ten years they will be no more elephant.

It’s that kind of juvenile reporting that further complicates the problem. Yes, poaching is on the increase and my own observations just on this safari support that.

But no, extinction is not imminent, and there is a more serious problem than poaching: regardless of the horrible poaching, there are still too many elephant.


It’s a difficult issue, because poaching must be stopped, and efforts from Buffett and others to do so are exemplary.

But Tarangire is no longer the only place to see huge numbers of elephant whose normal behavior is stressed.

Coming in today to the far north Serengeti near the Kenyan border, we counted over 100 elephant in one mass group, so collected it was hard to discern families. They were at the very edge of the park, adjacent Maasai farms.

These huge numbers seem to be almost everywhere we went on safari: from of course Tarangire, to even Manyara, to the crater, to Ndutu, to Seronera … everywhere. It’s quite possible elephant numbers are seriously declining because of poaching, but it’s also absolutely true that there are too many of them in the space that’s left.

And that distorts their behavior and makes them dangerous.

So let’s try to take a deep breath, thank Howard and others, but recognize the problem is very serious and unsolvable unless the overpopulation of elephants is also addressed.