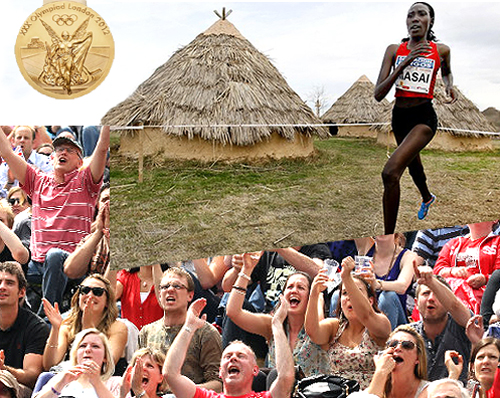 Kenyan runners are set to win 9-10 Olympic medals but their path to victory is ridiculously different from their competitors.

Any child athlete anywhere in the world who aspires to the Olympics has to first demonstrate winning.

And in many countries like Kenya, being chosen for the Olympic Team is not by winning a formulated try-out as it is in America. Rather, a professional committee makes the decision based mostly on recent victories achieved outside Kenya.

In large part this is because the country doesn’t have the high-tech equipment or venue good enough to actually measure global performance. They’re unable to produce a try-out with global standards.

So global excellence has to be measured by the contests abroad that the individual applicants enter. The Kenyan stars on the team this year include the marathon winners of Chicago, London, New York, Berlin, Boston and a number of other cities around the world.

(I remember introducing a softball league to western Kenya in the early 1970s. You can’t imagine what we did for bats and balls, and I’m sure that my star hitter might have performed differently if he was using a regulation bat.)

So how do you get that first win?

According to Forbes magazine, an aspiring Olympian starts spending $15-20,000 per year before even becoming a teenager.

That’s impossible in a country where the average annual wage is less than a tenth of that. And consider that two current Kenyan Olympians, a Maasai brother and sister, Moses and Linet Masai, come from such a poor village that without birth certificates they simply chose for their surname their tribe.

Forbes reports that early money for an aspiring Olympian goes primarily for coaching. The bulk of the twenty grand may actually be the coach’s salary, but there’s also living, schooling and travel expenses since you go to the coach, the coach doesn’t come to you.

In Kenya the coach works for free. For the world’s greatest runners he’s an Irish priest and the story about Father O’Connell is one of the most wonderful stories of the Olympics this year.

And the training area as you’ve already guessed is a high mountain village above the Great Rift Valley. Getting there from nearly anywhere in Kenya is expensive by Kenyan standards. Once there, the kid needs food and schooling, and all of this is provided by Father O’Connell and his mission.

The contrast is stark with an American child glamorously walking into a famous Denver gym with parents in toe.

Now Father O’Connell has no stage-of-the-art timing devices; he still uses a stopwatch. There are no perfect surface running tracks; kids run on dirt. The first day at his mission they aren’t fitted with $800 training shoes; usually they start barefoot.

And when they finally achieve his blessing to go compete on the world stage, his order has no money to buy them bus tickets to Nairobi. So who does?

The other successful Kenyan athletes. There is an unwritten code among Kenyan winners that they must fund the up-and-coming, even those who might ultimately beat them at the Olympics. Can you imagine Roger Federer doing that for Andy Murray? Yet that’s exactly what happens in Kenya.

Wilson Kipsang Kiprotich vowed recently he will smash the marathon world record at the Olympics currently held by Kenyan Noah Ngeny, who paid for Kiprotich’s first trip outside Kenya.

The three fastest men in the world, Kipsang Kiprotich, Silas Kiplagat and Nixon Chepseba – as professionally clocked in marathons the last two years — are all competing for Kenya in the Olympics. Together.

Father O’Connell’s village travels straight out of the Great Rift Valley to the London arena. It’s a sense of community worth all the gold in the world.

May I add there’s a lot of other things they can’t (or won’t) do, either?