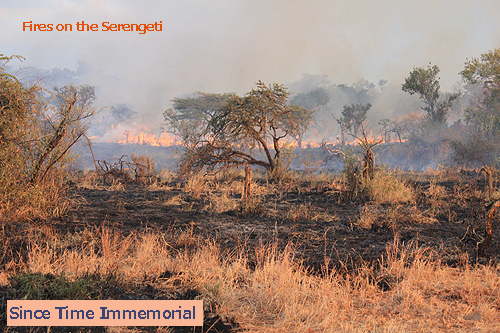 Is it really such a burning issue: why are the wildebeest so late?

I’ve often experienced them crossing from Tanzania to Kenya even later, sometimes not until August. Normally, though, the herds cross the two river border that separates Tanzania from Kenya by mid- to late June, so we’re a month behind.

This year it’s stinging Kenya more than before.

Kenya’s tourism is reeling from terrorism and a rapidly inflating currency. So the few tourists coming to the Mara who are expressing disappointment is just another blow the Kenyans don’t need.

Looking anywhere for a reason their vacation has been diminished, there are a number of American tourists now blogging incorrectly that the reason the migration is late is because the Tanzanians are setting fires in the Serengeti which is disrupting the wildebeest from moving north.

And of course the general collection of end-of-the-world nuts have picked up this version of what’s happening.

They’re all wrong, but first let me explain where the less apocalyptic are coming from.

The wildebeest eat grass and nothing but grass. Their traditional migration patterns are based on where the grass grows when. It’s that simple. Historically the rain pattern traces a parabolic circle the north of which is Kenya’s Maasai Mara and the south of which is Tanzania’s Serengeti.

The rainiest place in East Africa is Kenya’s Maasai Mara. When it’s dry everywhere else, it rains in the Mara, so the wildebeest go there. The Mara is higher and more rocky and has more acidic soil than in the Serengeti, and so the grass isn’t as nutritious. But at least it grows when it doesn’t grow in the Serengeti.

Separate from this rain dynamic that guides the migration is the age-old agricultural and wildlife management question about whether or not to burn grasses on a prairie.

A proponent of burning that I trust explains the necessity as the only way from keeping the prairie from turning into a forest. Most scientists agree with this explanation, but they also disagree that’s good. Most science suggests burning isn’t overall a good strategy for either agriculture (slash-and-burn) or wildlife management. In other words, it might be better to have a few more forests and a few less prairies.

The argument has been going on since Caesar.

Both Kenya and Tanzania park rangers burn their grasslands. Come September and October when the rains return to parts of the Serengeti and the herds begin to leave Kenya, Kenyan rangers start furiously burning to delay their departure from there.

So both sides do it, and both sides argue they do it for scientific reasons, albeit there is a short-term benefit that does for a very short while delay the herds. Burning, as you may startle yourself from remembering 3rd grade science, produces water (moisture) which drops on the burned prairie and immediately sprouts new short grass even without rain.

Alas, a very tempting reason to stay and have another bite.

It was very unfortunate that an excellent Kenyan newspaper, Nairobi’s biggest, propagated the inaccurate story. It’s beneath the standard of the Daily Nation but even worse, suggesting the fires are being uniquely set as a blockage rather than just the normal half-century old grass burning strategy is totally irresponsible.

The greatest reason the herds are late is because the rains – like everywhere in the world – have been very unusual. I’m sitting in a place of a horrible drought. East Africa – northern Tanzania in particular – has had unusually heavy rains, and this has resulted in much more new late grass.

The migration isn’t so hard-wired that animals will leave a food source. Migrations worldwide are driven by food sources. We had an unusual warbler migration this year in the Midwest, because bugs – their food – appeared earlier than normal.

Burning is incidental to this, perhaps a short-term fix delay (a week, maybe two) but nothing more significant. Tourists who believe they can fine tune their “migration vacation” in periods of two-weeks are nuts.

Except bad reporting and tourists who didn’t do their homework.