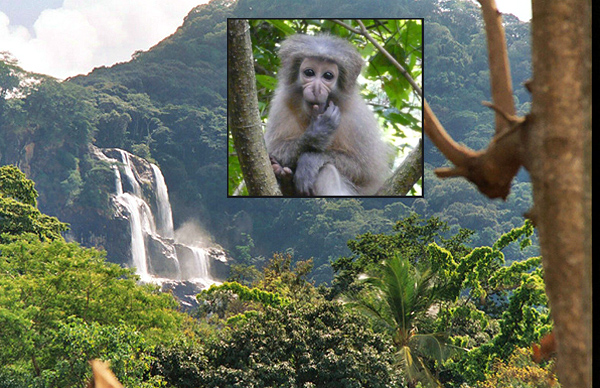 The remarkable thing was when I first climbed up to see the waterfalls in what was called the Udzungwa Mountains, for the life of me perhaps I did see a Sanje Mangabey. “Lanky” as I remember it. Cute, curious, solitary, grey. Staring at me as much as I was staring at it.

That was 1979, and it was the year that the mangabey was discovered.

There is so little left to be discovered among non-miniature mammals that this was a really big deal and continues today to strike discord among the several who all claim to have “seen it first.” So I’ll put myself in that category, too. Oh, and by the way, I’m going back to see it next June.

The first scientific announcement of the extremely rare primate was in the journal Science in 2005. But reports of the “highland” mangabey existed for five or six years before that and specifically because villagers near the forest had tamed at least one.

The claimants for “first view” teamed up together to publish the 2005 article. They included interns and field researchers for both the University of Georgia and Wildlife Conservation International.

Within a week the story spread around the world of laymen science. The National Science Foundation’s article, a great article in Science News among many others, clearly defined the discovery as major. Many scientists raced to the area and began to discover there were lots of wonderful things in the Udzungwa besides this rare primate.

There are no more than 1200 of these creatures left in two primary colonies in the Udzungwa Mountains. Consider this: “Udzungwa” in the local Kihehe language means “forest where the people live.” They don’t mean homo sapiens, because our species has never inhabited these forests. They mean these primates.

So they’ve been here for a while. And frankly they aren’t difficult to find in the context of rarer animals. It’s just that no one paid any attention to the Udzungwa until recently.

I’ll spend three days there next June with a group of curious travelers and we will try to find the Sanje. But the forest has intrigued me all my career. It’s only within the last few years that any reasonable accommodation existed for the ordinary traveler.

But the beauty alone is worth the ticket. This is a highland rain forest, like Ngorongoro’s rim or the Aberdare in Kenya, although generally much hotter than either of those. It is filled with rare and endemic plants and bugs and frogs and … monkeys. And it is one of the last remote places in Tanzania that an almost casual visitor can see.

Fewer and fewer of those places can be found on safari, today. I worry that the awesome moment that an amateur like myself sees something so spectacular and rare that the rush exceeds any expectations, is soon to disappear.

Some claim that’s the chant of an old man. I know, for instance, that much of the deep sea is unexplored.

But I’m a terrestrial guy. I can’t wait to get back to the Udzungwa. Maybe we’ll find a new… butterfly!