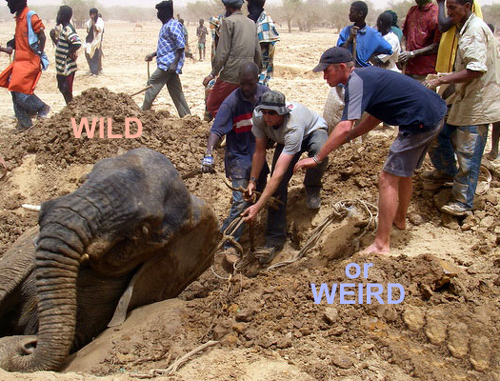 The wild gets less wild, and we begin to manage the great African savannahs like a zoo. Is it our bleeding hearts or our brainy conclusions? Should we intervene in the wild to save big game from natural calamity?

This intervention is a seachange in the way researchers have interacted with the wild for centuries.

Rachel McRobb heading a team of The South Luangwa Conservation Society pulled an elephant from the mud in May and attracted enormous attention worldwide. The story made front pages in the London tabloids.

Writing in her own blog, McRobb conceded that “Most conservationists believe that man should not meddle with the natural order and that we should allow nature to run her course however cruel.” And without any further explanation as to why she no longer adopts the rule, she admitted, “We simply could not stand by and watch them struggle and slowly die.”

Researchers with Cynthia Moss’ Amboseli Trust for the Elephants rescued an eight-month old calve from a deep muddy well hole after using Landrovers to chase the mother away. Landrovers and ropes were then used to rescue the juvenille and it was ultimately reuinted with its mother. Click here for the video of the event.

“We shouldn’t intervene where animals are dying of natural causes. In fact, human interference can have implications for other wildlife or ecosystem processes that rely on animal carcasses. It’s important to let wildlife be wild,” Australia’s Victoria State government natural resources ministry in Australia states in its SOP guidebook.

Most wildlife authorities continue to adopt this age-old viewpoint. The elephant rescues described above may beg the questions that global climate change or human/wildlife interactions or even outcomes caused by tourism contributed to the mud and hole but it would be a stretch to do so.

But McRabb’s honest admission and the rescue last week in Amboseli suggests researchers are changing their minds about this maxim, not just rationalizing it.

Oscar Horta at the University of Santiago de Compostela published one of several “seachange” position papers two years ago, arguing in meticulously logical detail that wildlife intervention may now be the right moral course for researchers to take.

But whether these decisions are coming from the gut as with McRabb or the frontal cortex as with Horta, there is no question the trend is gaining wide acceptance.

The days of Albert Schweitzer might be at hand.

Yet the much respected Nature magazine, which has been undertaking a lengthy discussion of this issue for several years, suggests otherwise. In its final position paper this year “Ethics of Wildlife Management and Conservation: What Should We Try to Protect?” biologists as well as ethicists from universities in Texas and Cophenhagen labored to reduce the complex conversation into five major issues.

I’ll let you follow the link for the minutae but I think they’re self limited conclusion still remains obvious: “We do maintain that explicit consideration of the values at stake should underpin careful debate about … whether constant human involvement in … wild areas is desirable.”

I don’t think they do think it’s desirable and I know they’re terribly worried about what a stink this will make.

For many years I was no board with what I think is Nature’s foundational conclusion. But I, too, am changing.

It’s not because I’ve grown more sensitive to animals, and I worry very much about the anthropormorphization of wildlife that occurs with this assumed growing sensitivity. Rather, I think it’s an admission that the wild is just not the wild, anymore.

There is already too much intervention in almost every nook and cranny of this planet to argue that there is anything unimpacted by development or human activity. It takes no scientist to know this. More people, more industry, more cabon dioxide, less of everything that was once in the beginning natural.

And given that state, however nostalgic we may be for the Garden of Eden, saving life and perhaps evening increasing life’s happiness becomes almost a first principal.