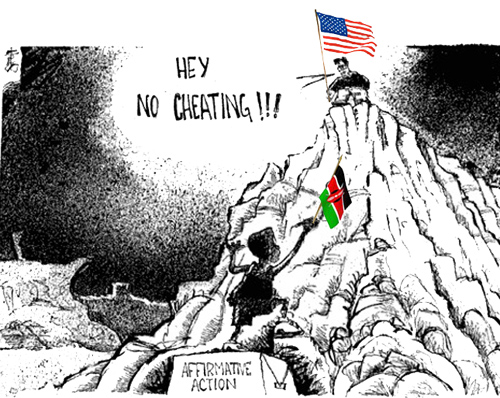 Our Supreme Court considers reigning in contentious affirmative action policies just as Kenya implements the policy in an extreme way.

Last week CNN reported that “race-conscious admissions” as a policy for determining university admission “appeared to be in trouble.” The report filed by Bill Mears suggested that Anthony Kennedy’s swing vote on the conservative court could preserve the general policy while striking down the specific plan from the University of Texas under particular review.

However broad or narrow this particular decision might be, there is no question that affirmative action in the U.S. is in decline, even as there is near unanimity among academics as well as commercial managers that policies which create diversity are over time very beneficial to everyone.

America stepped into affirmative action gingerly and took a long time to fully embrace it. That has lasted about a decade or slightly longer, and it now seems as though we’re gingerly stepping away from it.

Kenya on the other hand is going from a society almost exclusively managed by men to a forced society where at least one-third of the country’s power elite must be women in the course of a single election.

Although the debate and legislation has been confined to the make-up of Kenya’s government, there is little doubt that a one-third female Kenyan government will if not actually legislate rules for the private sector will certainly powerfully effect it.

Unlike the possibly too careful approach by America, I’m worried that Kenya’s might be too uncareful. The new constitution now being implemented is the driving force. The problem is that this very difficult section, which mandates the one-third rule, has only now begun to be addressed, less than five months before the next election.

Most legislators and public commentators promote the obvious way, which has become known as the “best loser rule.” When, for example, less than a third of the new legislature elected is female, then some of the duly elected male winners will be somehow automatically replaced by women closest to having won.

But how this metric will be calculated remains to be determined. Which district will be the sacrificial lamb and which female candidates will then be elevated? Will it be determined by actual votes or percentages or pro-rata?

The complexity of the issue is so great some argue it is too great to solve before March, when the next election occurs. Seventy, or one-fifth of the new National Assembly, will be appointed. This unappointed one-fifth was intended to be reserved for noncompetitive leaders like wise diplomats or career unionists who are appointed by the executive and National Assembly.

One argument suggests all seventy should be reserved for women, but then what if the gender level is still not achieved?

That’s probably a bad idea, since the unappointed legislators is itself contentious, a holdover from Kenya’s former constitution intended above all to achieve stability after a close election by allowing the narrowly won to beef up their control. Plus if applied in its purest, the appointments of legislators would themselves have to follow the affirmative action rule which was must be applied on its flipside, too: there can’t be more than a two-thirds gender dominance.

The issues in the Supreme Court University of Texas affirmation action case are no less or more complex than Kenya’s gender rule. But the scope of each is hugely different. And it represents the level of risk each society is now willing or not willing to take.

In the global arena today, America moves like an old man afraid of falling. Kenya jumps with abandon like a kid on a trampoline. The risks of failing govern America. The passion for more Olympians governs Kenya.