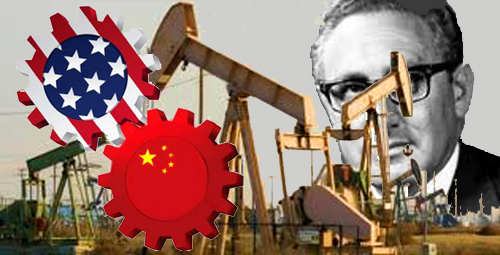 Yesterday in coordinated diplomacy that worked faster than a ping pong match, the U.S. moved a resolution through the United Nations Security Council that would impose harsh sanctions of both the North and South Sudan if they don’t meet certain goals in two weeks. With Chinese support.

Then China walked the resolution over to the African Union and asked them to deliver it as a reminder of a much older resolution passed by the African Union: North Sudan’s leader is under indictment from the World Court of the United Nations and since refuses to recognize the world body.

Then minutes later (and this is through a wizardry of time zones) the North “agreed in principle” with the mandates in the UN resolution.

This is no ordinary thing.

I’ve written several times in just the past week about the growing catastrophe in the Sudan as a poorly demarcated border between north and south that runs right through the oil fields erupted in war.

For one thing the U.S. – whose interests in South Sudan have been popularized as a George Clooney star movie — backed off as lead negotiator to let China figure it out better, and China did. The U.S. would never have found the time, the interest, or the politics to transport the idea through what it considers a weak and often corruptible African Union.

Many wince at the notion that diplomacy is so practical: It’s all about oil. We especially in America like to believe that goodness is simply an elongation of god, and that we pounded Iraq and Afghanistan and liberated Kuwait and got tangled up in Iran for any number of reasons except oil.

But remember it was that burrowing wolf hound Henry Kissinger who made mince meat of morality and elevated national “self-interest” above the Ten Commandments. And the criminal Richard Nixon was praised yesterday by Hillary Clinton for his overtures to China 40 years ago.

Yes, Chen should be given asylum in the U.S. Yes, China should reverse policies restricting human rights. Yes, the U.S. should stop lying about its motivations for wars in deserts where the population densities approach that of the arctic circle and day time highs outperform Roundup. And yes, the two should continue to work for harmony in the world.

Get the damn oil flowing in the Sudan, OK? Peace follows.