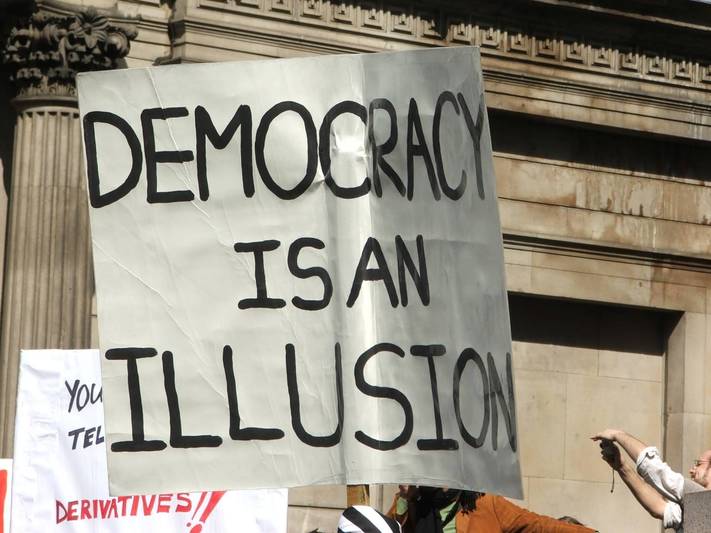 Warped democracy in both Kenya and the U.S. shows citizens will vote against their own self-interest. It amazes me.

Yet how different you’d otherwise think the races are!

On the surface, the American race is between progressive and conservative policies. The surface analysis of the Kenyan race is ethnic: Luo (Odinga) and Kikuyu (Kenyatta). There couldn’t be two different dynamics: political and ethnic.

And in both cases the large number of independents (15%) will decide the election .. Or so the polling goes. In the U.S. this is construed as independent political thinkers. In Kenya it’s any of the 41 other ethnic groups that compose 1/3 of the electorate, but the reason this is twice as large as the undecided independents identified in the Kenyan poll is because many of those ethnic groups are very remote and illiterate and probably won’t vote, or if they do will vote their “closest ethnicity.”

So what’s going on? Why is the bad guy so close?

Don’t laugh. Blogs use shorthand and avoid politeness. Bad in the U.S. is a man who has changed his positions with the wind of politics, a monsoon of hate and deception. Bad in Kenya is a man who is currently on trial in The Hague for crimes against humanity. Hope I’ve convinced you.

I guess we have to examine the similarities rather than the differences.

The bad guy’s family is not going to desert him. In Kenya that larger family is the ethnic group. In America it’s the 1%, or those-who-have-a-lot. Obviously there are exceptions in both places, but the rule looks good.

The bad guy castigates the media. Again, exceptions (Fox News & Limbaugh in the U.S. and certain Kikuyu-owned radio stations which are very important in Kenya). But the rule stands. The bulk of the media in both countries, which I believe is still founded in as much truth as can be unearthed, is broadly pro-good guy.

(I thought it particularly revealing yesterday that NPR aired a segment squarely blaming Republicans for the current political mess. Foolish to assume that NPR is always so patently progressive; they aren’t. This time one of their sources came from the very conservative American Enterprise Institute.)

The good guy compromises too much. My opinion, of course, but you could alter that to just compromises while the bad guy doesn’t. Presumably this is to attract the independents who determine the outcome, but is it really?

In Kenya Odinga compromised from the day he signed an agreement 5 years ago that conceded his obvious victory in national elections and which while insuring a hunk of power for himself gave more of it to his opponent who had lost but was the incumbent.

In the U.S. Obama’s compromises are legend, now. Did you hear Jimmy Kimmel’s joke at the recent White House Press Correspondent’s dinner? The compromise section is about 2min 30sec into the YouTube link.

This is very important. Both these men compromised to the point they lost supporters, and if they lose their respective elections it’s likely the loss will be small enough that it could easily have been reversed had they not compromised.

And the inverse is true of their opponents. Both would not be where they are in the polls had they compromised at all. And this is likely the explanation for why they also flip-flop so much once their opponents in their primaries have been defeated. Their only hope for achieving independent support is to reverse intransigent positions.

(Kenya doesn’t have primaries, but it does have a primary-like process.)

The good guy had many more careers than the bad guy.

Neither Romney or Kenyatta has done anything all their lives except business deals and politics.

Finally, and fundamental to my thesis, the only way the bad guy has gotten even to the point of being a legitimate challenger much less a possible victor is that the bad guy garners the support of the people he hurts.

In both Kenya and the U.S. the bad guy has a litany of deeds to live down, business actions that put people out of work essentially. Romney’s pinnacle was Baines. Uhuru’s was his indictment by the World Court.

While the good guy loses the support of the people he helps.

Progressives are abandoning Obama in droves. From my point of view this is their problem, not Obama’s. They read way too much into the man. Similarly Odinga has lost the support of key ministries and their lock-step constituencies because of his policy compromises he couldn’t refuse to make were he to remain in power. Again, his supporters expected more than he ever suggested he could deliver.

A corollary to my thesis, then: too much is expected of the good guy; too little of the bad guy.

Putting this all together I don’t think the dynamic is entirely that people believe lies, although with the right TV ad they might. I think rather it’s anger. I don’t think intellectuals vote against their own self-interest (Obama’s independents and original progressive supporters deserting him at their peril of a conservative administration winning) just because they want another change, just to be different.

And I don’t think Odinga’s supporters abandon him just because they want a change, just to be different.

The implications of a wrong vote, against one’s self-interest, are too severe for a willy-nilly decision. Something stronger is motivating this: anger.

And why there is so much anger, and why it’s directed as it is, is beyond my job description. But anger is a powerful tool in elections. And unfortunately, it’s pronounced in both Kenya and the U.S.

Pity it’s something that connects us.