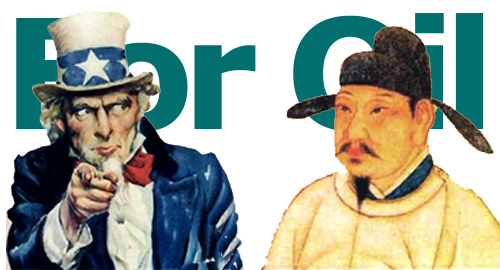 The time has come for China and the U.S. to become allies to stop the war in The Sudan and get oil pumping, again.

The U.S. must immediately nominate China as mediator in the North/South Sudan conflict with wide powers to demarcate borders. Yes it’s agonizingly obvious it’s all about oil, but China unlike the west has never pretended otherwise.

There is now a movement in Congress to implement this as a resolution urging the State Department to do exactly this. Tomorrow Hillary is in China. Unfortunately a Chinese dissident is dominating the issues, so this may not be the moment. But a moment we need.

Yesterday a Dutch journalist confirmed that very nearly all-out war had begun along the border areas. The North declared a State of Emergency which in Bashir-speak is a declaration of war.

This war was started by The South, the dandy of the west, and recently independent from the North. But in typical colonial style, the freedom the west engineered for the south from the north is incomplete and unworkable.

Throughout the last several centuries of western war, colonization then independence, the net effect of the west’s efforts have been to create weak and corruptible states with immature political systems. The recent Arab Spring and Twevolution is rectifying this for much of Africa, but it’s taken more than a half century.

Global events move too fast today to wait 50 years for the Sudans to become friends. China, the U.S. and the west need the oil sooner.

The Director of the World Peace Foundation, Alex de Waal, spelled it out brilliantly in a lecture to the Royal African Society in London as a simple two-step process which is laughingly obvious:

(2) Adjudicate the borders, which are the oil fields.

But it was de Waal’s eloquent explanation that unlike so many other past conflicts these two imperatives are relatively easy and within reach of the world community.

He explained that there are plenty of UN and African Union troops on the group in South Sudan to stop the fighting and police a cease-fire. It would take minimal resolutions from both organizations to effect this policy. It could happen, tomorrow.

And I’m supplying the implementation of the second imperative: China.

Even as the conflict unfolds, the president of the South was in China accepting an $8 billion loan. And China is about the last friend on earth of the North.

The only obstacle to the above, really, is America. Obama has 100 green berets and support within a few hundred miles of the conflict zone, a rather poignant statement. But current Obama policy isn’t bad. The problem is the lingering militarism of America’s last 40 years.

The president Bushs’ singular expert on Africa, Jedaya Frazer, (who I praise by the way for her handling of the 2007 Kenyan turbulence) essentially argued recently to the Council on Foreign Relations that the North should be bombed out of existence.

Frazer has become the intellectual mouthpiece for the Right Wing. What she says is either what they believe or will. It’s a dangerous sign that once again polarized politics will wreck this otherwise slam dunk solution.

Frazer’s Bush’ pre-Obama militarism to be applied to every conflict in the world had lasting effects on many of our allies. Britain, for example, follows America’s lead on foreign policy and shifts less nimbly than we do ourselves.

But it’s time to bury the ideological hatchet. The west cannot afford another major war in the world any more than China can lose a drop of oil.

I see a real partnership, here.