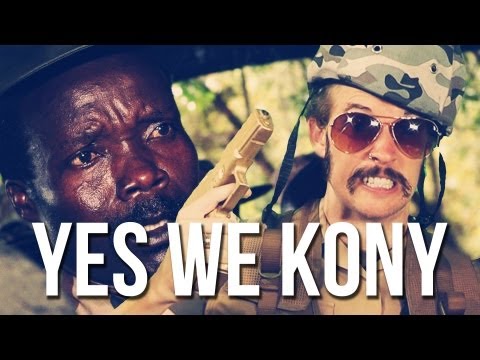 The combined viewers of YouTube videos mocking Invisible Children’s video about Joseph Kony has now exceeded the viewership of the original video. What an infamous mess.

But has YouTube corrected a terrible wrong or simply added more wrongs? I really don’t know how to parse my feelings of disgust, anger, sadness, confusion ….

I was first attracted by a heavily viewed parody on YouTube by TheJuiceMedia. This hilarious video is funny and right to the point: Invisible Children’s million viewer video was a scam and essentially racist. Hopeful there were other creative attempts, I started the YouTube search.

But there weren’t any others as professional and poignant, which satirized facts but that were real facts. I moved quickly into tunnels of the pathetic to the dungeons of absolute horror.

There are the namby pamby self-appointed talking heads like ThioJoe who apparently has a regular following of thousands and who is principally known for his recently rediscovered bedroom closet where he “found a bunch of military gear that I had bought at military surplus stores over the years.”

Thio just talks to you about everything he doesn’t know, among that tome of ignorance Joseph Kony. Easily dismissed if it hadn’t received over 20,000 views of which I of course contributed. Did I watch the entire 2:18 hoping for something worth watching, or just to reenforce a world view of an apocalyptic society?

In ThioJoe’s expressionless face are millions of faceless people, whose brains have been replaced by nonsense videos.

But ThioJoe’s and dozens others like him are not particularly offensive per se, more of a curiosity to me. I kept wondering if he were real or a robot. But the list of offensive videos is actually greater. I can’t even bring myself to link them here for you. Just make your own YouTube search of “joseph kony spoof.”

They include Finish productions that are the most racist photoshoped pieces I’ve every seen, British private school projects that would have been banned when I was in high school for gross indecency much less intellectual bottom feeding, and actual attempts at selling grenade launchers!

I’m flabbergasted. Has Marshal McLuen’s “the medium is the message” gone viral, too? At least restricted to the demographic of people who watch YouTube, does nothing mean nothing anymore?

But we’re talking about more than 10 million people, conceivably many more, who have watched junk, nonsense, idiocy or whatever you want to call it featuring Joseph Kony! Kony, Invisible Children, the LRA, African wars and misery and our responses to it should not be junk, nonsense or idiocy.

This is incredibly troubling. The Joseph Kony/Invisible Children story is not yet well understood. It’s driving American foreign policy and using my tax dollars in ways I don’t approve. It’s harnessing the generosity of millions with bad ideas and falsehoods, essentially exploiting good intentions rendering them pointless if destructive.

But how on earth do we untangle this mess when the intellectual attention span of the world can get no further than these unbelievable YouTube videos?