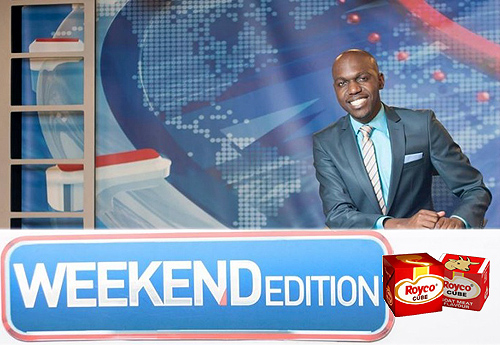 The above is not the rant of some leftie like myself. It’s from a respected, very popular national news anchor in Nairobi.

Chastising his American colleagues for not calling the Planned Parenthood shooter, Robert Dear “what he really is, a terrorist,” Madowo in a few paragraphs explained American racism, why we go into endless wars, why black policeman are now being prosecuted, and probably a dozen other American ailments.

Larry Madowo is probably the most watched and liked young African news anchor on the continent north of South Africa. He’s witty and insightful. He writes and speaks English better than most Americans, travels constantly entangling himself in injustices that he recounts with mounds of humor.

But time and again after drilling down into some western wrong (like Dutch MacDonald’s selling their tiny packets of ketchup for 75¢) Madowo sees the root explanation as western racism.

“If [Robert Dear] was a man of colour, the talking heads and think-pieces would not have stopped theorising about his motive and how his background led to all this. But white shooters are almost always ‘mentally disturbed lone rangers’ in need of understanding and support from society.”

“Three people were killed and at least five others wounded” but because the murderer wasn’t Muslim and didn’t behead his victims “American news outlets won’t call him what he really is… because of the colour of his skin.”

It’s worth considering but Madowo has fallen into the trap of many modern media personalities: oversimplification while playing to the ratings.

Racism surely is at the root of many American evils but American media aren’t calling the Planned Parenthood shooter a terrorist not because he isn’t black but because Americans foolishly believe that terrorism is something strictly external.

We have compartmentalized foreign violence as terrorism and domestic violence as anything but, something less threatening and onerous.

Statistics don’t seem to matter: exponentially more Americans are killed annually by American rebels and shooters than foreigners. Extent of destruction doesn’t seem to matter: the effect on Boston’s economy from the marathon shooters is multiple times anything foreign that’s happened in the last few years.

“Home-grown” is a nice adjective for Parisian bombers which is begrudgingly becoming accepted by the American populace as the sobriquet for the killers there, but it just doesn’t apply here.

Another Madowo episode also illustrates this.

Customs agents in San Francisco delayed him unconvinced that they were foods.

“A young black male travelling internationally always raises eyebrows. Traveling while black is to accept indignity, racism and delays because of the colour of your skin, even in a post-Obama world. Those of us village boys who grew up dreaming of faraway cities and now have opportunities to visit are resigned to that ugly downside to it all.”

It’s quite possible that the San Francisco customs agent had never been east of Vegas or north of Monterey. Anything that isn’t labeled “Hamburger Helper” is suspect.

Indeed racism is sustained by ignorance, and ignorance is what I’m talking about here. We’ve got a barrel full of problems in the U.S. as a result of a generation of negligence from a government hamstrung by crazies.

But as we begin to disentangle our rotting fibers to start applying fixes, let’s be clear about what to do. In these cases, it starts with education.