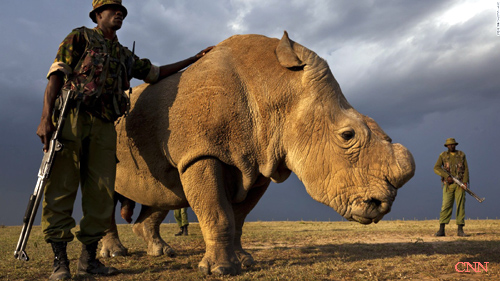 The age-old economic debate whether a government can adequately control demand by regulating its market has moved onto the survival of the rhino.

Practically speaking, the value of buying rhino horn products that remain in South Africa is almost nil. The value of a rhino product comes from demand from far away Asian markets.

(CITES is a fantastic world-peace treaty that I’ve often written about. Use the search bar on my blog to learn more about it.)

CITES was created to save elephants, and it did. Various whales and fishes have also been saved from extinction, but there are hundreds more species that have benefited from being “listed” at various levels of restricted trade.

Rhino were among the first animals to be “listed” as off-limits to international trading by CITES. The rhino horn commands an enormous price in Asian markets where its powder is believed to have medicinal properties capable of curing stomach ailments, reducing fevers and even curing chronic illnesses like diabetes.

The weakness of CITES is proved in the fact that even today powdered rhino horn is legally available throughout Asia, often displayed in the windows of store-front drug stores. Acquiring it – from Africa or India – is patently illegal under CITES. But once acquired, the trade within the country is entirely the purvey of that country alone.

Opponents of CITES thus argue that all it does is perpetuate black markets. Proponents point to several studies conducted when portions of the treaty were lifted temporarily (such as for auctions of stockpiled elephant ivory), when refreshed markets stimulated new demand which in turn broadened the black market.

In an attempt to close this contradiction some countries have passed laws prohibiting internal trade in the same species that CITES prohibits international trade. The Obama administration is currently in the process of an uphill battle that will prohibit the domestic trade in elephant ivory.

Until last week, South Africa had prohibited the domestic trade of rhino horn.

Rhino – unlike elephants – survive because of private game farms, ranches and fenced national parks (like Nakuru in Kenya and Hluhluwe in South Africa). The horn is so valuable and the animal so easy to kill (a single individual with a relatively small gun has an excellent chance of hitting the very large rhino heart from the side of the animal) that only by virtual sequestration from the true wild can it be conserved.

And even so, with great difficulty. Rhino poaching and black marketering is legend. The 20,000 rhino alive predominantly on southern African ranches and farms represent 80% of the remaining population, but the poaching of rhino in South Africa has almost turned into a war.

South African Rhino farmers argue that they have an extremely valuable product that is entirely sustainable on the free market. Without a market, poaching ramps up to supply demand. Farmers claim they require virtual armies to protect their herds.

“This is a momentous judgment,” the plaintiff rhino farmer told the press. “I would just hope that the world understands that if I don’t sell rhino, my whole rhino herd would be dead within the next ten years.”

Rhino can be sedated and portions of the horn scraped off. The powder is more valuable than gold. Like fingernails the horn then regrows with virtually no negative effects to the rhino.

South African rhino farmers have been stockpiling huge amounts of rhino powder for many years, certain that the day will come when CITES will realize that market demand in Asia can be adequately supplied without endangering the animal. In fact, they argue, the pressure for poaching will abate.

Most scientists, CITES and the South African government disagree and that’s why there was – until five days ago – a ban on any sale of a rhino product within South Africa.

The irony in all of this is, of course, that there is not a large enough market just within South Africa to sustain the farming. Clearly farmers believe by opening the valves on the internal market, it will somehow facilitate the international one. That’s illegal.

But that’s not their problem, is it.