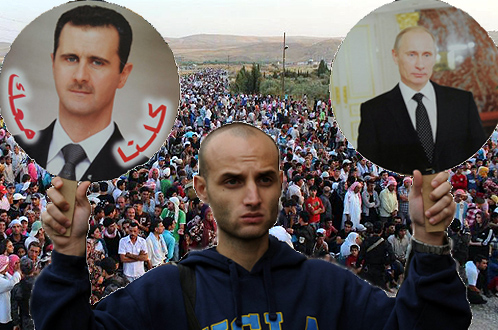 One of South Africa’s most prominent businessmen has called on President Obama to align with Russia and Iran to end the Syrian conflict.

Kalim Rajab told Obama this weekend to “dance with the devil” and compared the current situation in Syria to that of World War II.

Rajib is Director of the New National Assurance Company, South Africa’s first entirely black owned insurer, and one of the country’s largest.

The refugee crisis caused by the Syrian conflict is troubling every part of the world. Immigration is an issue that caused a series of violent outbursts earlier this year in South Africa, where dozens were killed.

Like Germany, South Africa had an open-door immigration policy since the end of apartheid, and the country is the clear beacon of hope for many in sub-Saharan Africa.

But since the violence in May, South Africa has deported more than 15,000 people it considered “illegal immigrants,” although the country’s laws are unclear about exactly who is considered a refugee and who is an illegal migrant.

Every stable country in the world has some sort of migrant problem. Who would have thought only a year ago that one of the EU’s most troubled countries, Hungary, would become the focus of this problem?

Kenya has twice tried to close the massive nearly million-person refugee camp of Dadaab located on its border with troubled Somali. Only pressure from the U.S. and Britain has stopped them.

Social media has widened the opportunities for those who wish to flee an unstable place, and greatly increased their chances of making safe haven.

Rajib views the refugee crisis in a similar vein to the Nazi’s methodical and ever increasing assumption of territory in Europe prior to the outbreak of World War II.

“The irony of Churchill’s finest hour is that in opposing two ideologies he abhorred – Nazism and its twin, fascism – he had to temporarily reconcile himself with another ideology he abhorred – communism.

“How appalling it must have been to Churchill to find common cause with the butcher of the Ukraine,” Rajib concludes referencing Stalin and Obama’s need to discount Russia’s current occupation of Crimea in order to forge an alliance to if not end massively diminish the Syrian conflict.

Isolationism has never had a good rap, and I’m not one to fully embrace it. But in this case I worry about anything that America might do.

It seems in my life time that we’ve never done the right thing in international conflicts and that all we’re capable of doing is escalating them.

So I disagree with Rajib, not because the alignment with Russia might not result in a better outcome than we currently have, but because such an alignment should occur first with Europe, not with the U.S.

We must defer. Deference to those who are actually feeling the problem far more than we are I feel is essential to any future policy we embrace. Europe is moving with the speed of a glacier, encumbered by a new global nature that morally is exciting and encouraging.

It’s a tricky time for Europe. There’s no need for America to muddy the waters.