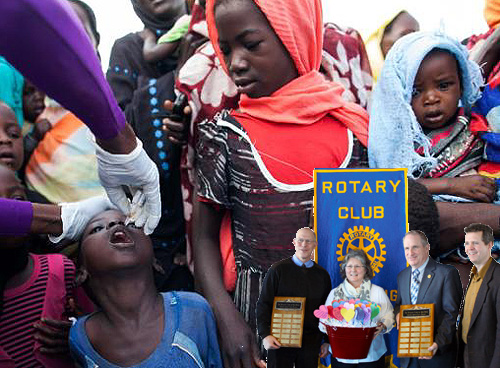 Polio may have been eliminated from Africa.

Although the context is Africa, this is an uniquely American story. It’s a hero’s tale of misplaced generosity: More than 30 years ago a generous group of American middle class business leaders decided they would eradicate polio.

Last week the Global Polio Eradication (GPE) Initiative announced that it had been one year since any new case of polio had been identified in Africa.

(Qualification: a handful of new cases caused by the vaccine itself persist in Nigeria and Madagascar, but these are not infectious.)

The GPE began in 1988 after a 1985 Rotary Club project inspired when a Rotarian visited the Philippines and was moved by efforts there to eradicate the disease.

Within three years individual Rotarians had donated almost $200 million dollars. (To date they have contributed more than $1.3 billion.)

Reluctantly United Nations organizations joined the effort. I say reluctantly because the science of public health was most developed within the United Nations community, and it was understood by them that “a few years” was not a realistic goal.

The UN and its agencies get beaten to death when they set goals they don’t achieve. But UNESCO (the United Nations Educational Scientific and Cultural Organization) agreed to partner in the effort when convinced by the less political World Health Organization (WHO), which also joined the effort in 1988 after America’s CDC came on board.

But none of these three public health organizations – attracted by the enormous amount of the Rotary contributions – wanted to be the lead organization.

It was understood that if public health organizations’ assessment of the enormous amount of time and money the project really needed were honestly conveyed to Rotarians the project might be abandoned. More puerilely, they might not get use of the funds. So the GPE was formed as an umbrella organization.

I was a Rotarian at the time, and I was extraordinarily humbled by my suburban club’s generosity towards projects I was developing in Africa. So I was roundly criticized as hypocritical and selfish when I opposed the polio campaign.

I knew the goals were unrealistic. Everyone was treating polio as if it were smallpox. The eradication of smallpox worldwide in 1978 (officially announced in 1980) still had enormous resonance in 1985 as a successful worldwide public health initiative.

WHO suggested, designed and led the effort to eradicate smallpox, a decade-long effort that began in 1958. The world – particularly America in 1958 – was considerably more socialistic than it is, today, and the successful eradication of smallpox in the U.S. and Europe inspired wonderful governmental generosity to take this know-how into the undeveloped world.

It was expensive, and it was paid for by increased taxes on westerners.

Rotary is a private, capitalist club. To its lasting credit in this troubling period of change in America it was also developing thousands if not tens of thousands of small projects that were working better than the bluster of aid that was flowing for crony reasons during the Cold War.

But Rotary was not accountable to the body of science which governments and world political organizations were.

I knew that eradication of polio would take more than “a few years” and more importantly, that the quarter billion dollars raised for a few-year effort would have to become substantially more if the ultimate goal of the project was to be realized.

I knew because I had watched polio immunization in Africa fail, first-hand.

The problem is that a single immunization as was used to eradicate smallpox won’t work with polio. Polio eradication then required at least two immunizations per child and they needed to be spaced months apart.

That is a concept near impossible to convey to an illiterate peasant and particularly to skeptical ones. It’s also a regime that requires meticulous accounting and reporting. Who is immunized when is not an easy task to record when so many millions of young, undernourished and illiterate children are involved.

So it’s taken a little bit more than a “few years” and by the way, Rotary’s goal of worldwide eradication has not occurred. The infectious polio virus persists in Pakistan and Afghanistan.

It’s unclear how much has been spent to date. The New York Times reports the effort costs $1 billion/year.

Last February the Rotarian who inspired the program celebrated the 30-year effort by explaining why he felt the project could be done by Rotary:

“We didn’t need medical people, we could do it ourselves.”

Do it yourself is an American concept that is horribly immature. There is very little in the world today that can be successfully accomplished “by one’s self.”

Teams of very different kinds of people, spanning enormous disciplines and representing high science and lengthy specific experience, are required for almost everything even something as simple as counting children when the context is global.

What we need to do is tap into the incredible generosity of an individual Rotarian, which I can absolutely attest to. We need to develop that twinkling morality into a complete understanding that no Rotary – no homogenous organization – can work alone in a global context. Only massive efforts coordinated by governments can achieve global success.

And equally importantly, we must accept the facts, however daunting they may seem. Inspiration is great. Science is, too.