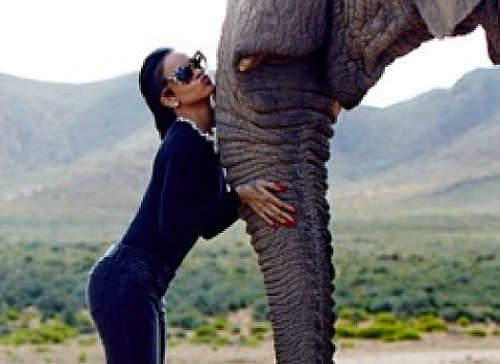 Here’s a flash: elephants aren’t capable of human emotions. Neither are whales. Or your dog.

Despite whatever pretenses we might employ for our own happiness, animals don’t share our consciousness. That doesn’t mean they might not have “animal emotions,” but since we aren’t elephants, whales or dogs, we’ll never fully understand what “animal emotions” are.

We’re limited to explaining things with our own language, with our own consciousness. A great hazard develops when we attempt to portray animal behavior in human terms. Anthropomorphizing results in more destruction to the planet and its biodiversity than any other human enterprise.

Katy Payne is one of the most creative and perceptive animal researchers of my life time, and her principal studies have been with elephants and whales.

This, in turn, led to remarkable discoveries about elephant communication.

But in an interview aired on public radio this weekend, Payne’s science was eclipsed by her religious or spiritual beliefs and that, in kind, diminished her science by a huge helping of anthropomorphization.

Fifteen years ago, in a passionate oped in the Washington Post in which Ms. Payne argued for increased protection of elephants, she wrote:

“Elephants’ experiences are, in short, collective, and the collectiveness of their experience colors their responses to everything. The collectiveness escalates and multiplies the trauma associated with losses, and in long-lived animals with long memories, such losses are not soon overcome. Elephants that survive poaching and culling may never fully recover from the repeated loss of what they once identified with and held dear.”

Whales are not human composers. Elephants do not experience human trauma.

I found the Sunday interview extremely enlightening, because it confirmed a long held belief that anthropomorphizing is a very religious or spiritual phenomenon, and that when science is mixed with religion or spiritual contemplation, things get messy.

That messiness is one of our highest challenges. Science is critical to our survival, but so is a spiritual orientation to our existence. Science can go just so far, at least so far. So for the time being anyway a spiritual foundation is critical in bridging the gap between science and what we don’t [yet?] know.

Ms. Payne deals with that challenge in one fell swoop by considering elephants as people. That shortcut is dangerous.

It’s particularly dangerous for elephants, because in the diminishing resources of our planet we have begun the painful exercise of deciding who gets what. If elephants are people, I can assure you that the honorable citizens of Texas, the aggrieved displaced persons of Kenya, and the young geniuses of the Mumbai slums will outrank the pachyderms exponentially.

But it’s also dangerous for people.

If our emotions are in some way limited – if only to the length of our waking lives – and if those emotions are consumed with empathizing with elephants rather than babies with malaria, more human babies will die.

This is no zero sum game. Our universe has categories of value, and they range from sea stones to lonely hearts. In my view they are all inextricably linked, but are not of equal value.

Understanding the linkage provides us with the necessary orientation for best conducting our survival. That begins with the understanding that our consciousness is primary. Humans are tops. Nothing in existence exceeds our human consciousness, including elephants, whales and your dog.

Yet our premiership may indeed be dependent upon sea stones, elephants, whales and the fantasies we have about Rover because, at least for now, we’re still molecular. I believe so.

Everything that exists is sacred. But not everything is human. Only we are human.

I appreciate all the work Ms. Payne has done to increase our understanding of elephants, but I worry that her conclusions which render the animal in human terms undermines her important work and endangers elephant survival.