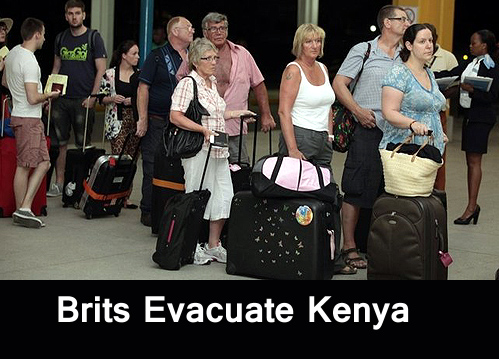 The U.S. and Britain have issued specially strong travel warnings on Kenya. British tourists are being evacuated from the Kenyan coast.

Personally this is a stinging disappointment. We have multiple trips to Kenya planned; I was scheduled to be in Nairobi for three days in a couple weeks. There are unique and compelling attractions in Kenya found nowhere else in Africa.

Travel to Kenya’s game parks remains safer than it’s been for years. Simple numbers on not just kidnapping or murder, but even petty theft, are at historical lows in Kenyan game parks, probably lower in fact than in neighboring safari countries with average incidents.

But travel to its coast is now likely dangerous, and the overall perception travelers will now have means that travel to anywhere in Kenya won’t render the magical, super, exciting vacation that a good safari must be.

Vacations are composed of considerable amounts of positive anticipation, not just during the day to day events during the holiday, but even more so in the exciting preparations for it. A Kenyan holiday will now lack this essential ingredient.

The reason for Britain’s particularly harsh move was not triggered by any event. There has been no new significant terrorist incident since January 2, and that I almost didn’t classify as “significant.”

It was an improvised explosive device thrown into a crowded nightclub near the fancy resorts of Kenya’s south coast. But it was very amateurish, and the club was not a place tourists would normally go, anyway.

A half dozen other individual and pretty botched disruptive acts by who knows what kind of deranged or forsaken people has been recorded in places like the Nairobi airport this year, but really these were hardly more than fratboys freaking or disgruntled employees swinging.

The serious last “tourist” attack was on the Westgate Mall last September. As I’ve often written, it was not clear that was targeting tourists, but it could have been. Prior to that we have to go back nearly three years for any specifically tourist targeted attack.

So what prompted the Brit warning?

We don’t know, but it’s not always that the Brits and Americans follow each others’ warnings in lockstep as they did this time. Something’s in the air.

And the unique drama this time that highlighted the warnings is the ongoing evacuation of British tourists from beach resorts by the tour companies that brought them there. No other nationals are being evacuated, including Americans, and here’s why.

Americans or most Europeans buying travel insurance pay up to 10% of the amount they wish to be covered for, and in the case of Americans, you can’t insure yourself against terrorism despite what some travel insurance companies may claim.

In Britain, the government guarantees the underwriters of travel insurance and it’s extremely affordable. Most Brits don’t buy it for a single trip, but on an annual basis, and the cost is generally around $250 per person per year.

That does cover your trip investment, health and safety and personal belongings against terrorist acts, but only if you abide by the government’s travel advice.

When the government says “Leave Now” – which the Brits did yesterday regarding the Kenyan coast – it means if you stay you’ll be without insurance. Travel companies carrying these passengers then become liable if something happens.

They have no choice but to get their clients out.

From a non-Brit’s point-of-view, however, this is extremely severe. Britain has never issued evacuation advice before. As I said, something’s in the air and the Brits are convinced of it.

And the Americans, who followed suit within hours, believe it, too.

This is catastrophic for the Kenyan tourist industry. Indeed, all the activity now may lead to a prevention of any terrorist act, hopefully. And if so, we’ll never know the reason. We’ll never know if it’s legitimate.

But I trust the Brits and Americans with regards to their travel advice, today. I didn’t always.

Travelers already committed to Kenya will have some tough decisions. No one should go to the coast, now, but as I’ve said, the game parks seem very safe. Anxiety will be weighed against losing deposits.

It is a horrible fact in our world, today, that “improvised” terror striking as disparate communities as Boston and Diani Beach can determine not just the fate of holidays but the fate of entire economies.

“Terror” has become part and parcel of our daily lives.