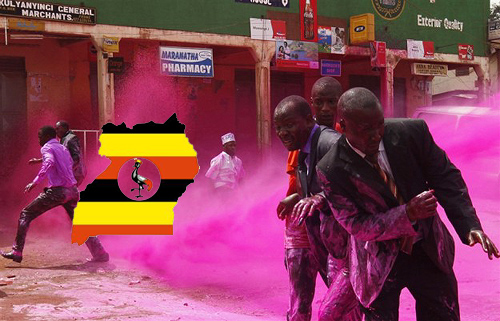 Twevolution is like the recovery. It comes with a blast, planes off, has its ups and downs, and societies with major unresolved issues caught in the middle turn messy for a very long time. It might be time to scratch Uganda off your tour list for the next generation.

Political parallels to economic conditions are easy to make, hard to explain. Think of it this way: Down there in the nadir of the global recession anybody still standing had hope. High hope. They looked to the sky and found jobs and freedom.

As the Egyptians pummeled Tahrir Square with rocks, TARP and stimulus seemed to have righted the sinking ship. This was the time! Ireland was saved, so could Libya! Nothing could get worse and everything would get better. This adrenalin powers a lot of people to do a lot of things.

But now, something bad is happening. It’s not going according to plan. We listen to leaders blame tsunamis and other leaders, but we know the sickness is deep. The revolutionary wonders, does he really want power in a future that looks so grim?

So true or not that things are bad and the future is bleak, this is what protesters in Uganda feel, now. At the risk of over generalizing for an important point, I remain continually amazed at how fatigued African’s psyche becomes with convoluted politics compared to an American’s.

And I don’t mean to suggest that Americans’ attitudes are healthier. Not at all: It would probably have been much better for us and the world if we had left Iraq a long time ago. We might be the stubborn bullies, and Africans the practical realists.

Uganda is in the doldrums of despair. It’s a lousy place to live in, and not a good place to visit. A little while ago it was darn right dangerous to travel to Uganda, and who knows, it might become so, again. But right now, the horizon isn’t so fiery as very, very grey.

Uganda’s dictator is growing crazy with his apparent successes; he wouldn’t have acted this way only a year ago. A group of presumed businessmen supporters visited him yesterday, and he shouted at them like a disturbed headmaster. Supporters. He lashed out at supporters.

Last week, Uganda’s Minister for Security Muruli Mukasa told the media that protesters were terrorists and that the Ugandan opposition is using “Twitter, Facebook and YouTube to wage a campaign against the security forces and to psychologically prepare the people, especially young people, for armed insurrection”.

Well as a matter of fact, that’s right. But the fact the minister is now turning what used to be a successful tool against him into a tool he can use to beat them up means the tide has changed. The Ugandan government is gaining control.

Protests continue, don’t get me wrong. Major protests are scheduled for next week against electricity rationing and a specter of a massive protest against the dictator for turning a water cachment forest into a sugar cane field is imminent.

This is not a place tourists should visit. Just several days ago a couple hundred ardent, well-dressed demonstrators including a number of high profile opposition politicians, began a peaceful protest that prompted live ammunition fire from police, then a suburb drowned in tear gas.

But then as if to turn the war into a birthday party, Ugandan police sprayed the retreating demonstrators with pink paint.

It’s not the first time pink paint has been used in Uganda. In fact, its purpose was to quell the demonstrations against the draconian ‘Kill the Gays’ bill that remains pending in the legislature but for the moment is going nowhere. The symbolism is obvious.

Perhaps they just had a lot of pink paint left over. Maybe the increasingly brutal regime is equating gays with all activists. Whatever, it’s a sign that things are ugly but not getting uglier. The protests are smaller and failing. The government believes that either dissent is waning, or that they can handle it just fine.

The point is reached, as it was in Zimbabwe decades ago, when crazy dictators become so firmly in control that not even a world economic recovery can pry them from power.

Society begins to depend for its simple day-to-day existence on the growing tentacles of dependency, from the dictator to his minions. As he becomes less and less accountable, he begins dishing out favors and money that replaces hard work and profit. Remove him at your peril.

I hope this is a premature analysis for Uganda. We should know, soon. Meanwhile, stay clear.