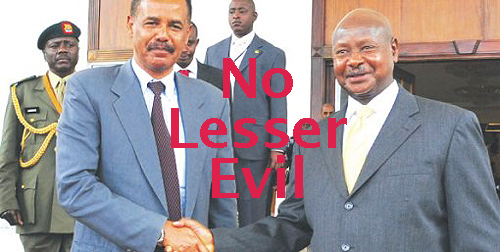 Joburg’s main newspaper is spot on: the downfall of Libya will “put a new spring” into twevolution. And old hags dealing with aging revolutionaries no longer passes muster: Uganda, Eritrea and Al-Shabaab are in a vaudeville skit as the age of pictures begins!

Two of Africa’s dwindling dictators spent a nice weekend together in Kampala. Yoweri Museveni, Uganda’s dictator, and Eritrean President Isaias Afeworki, are two of the most disliked people in Africa.

Museveni is cracking down on his people like never before. Afeworki is already under UN sanctions, and a resolution currently before the Security Council could effectively strangle him (although China is not yet on board).

Museveni’s crimes are methods of keeping himself in power. Afeworki’s crimes are too, but have drawn more world attention because of his funding of al-Shabaab, al-Qaeda in the Horn of Africa, which until recently controlled nearly two-thirds of Somalia.

Museveni and Afeworki are old school guys: “The enemy of my enemy is my friend”-school. Ethiopia, from whom Eritrea wrenched independence in 1993 and who remains its most bitter enemy, is an ardent supporter of the transitional government in Somalia battling al-Shabaab for control.

But wait, wait! Uganda is on the same side as Ethiopia, isn’t it? Here’s the truly unbelievable irony: Although the African Union has armed troops supporting the transitional government in Somalia, only Ugandan and Burundi soldiers remain from the original force which was much larger and included Kenya.

Uganda is by far the dominant force. So Uganda is supporting the enemy of al-Shabaab ostensibly more than any other African government.

And Uganda paid dearly for it last November, when al-Shabaab blew up two sports bars in Kampala packed with people watching the world cup. Nearly 80 people were killed.

So what’s going on, here? Where’s this enemy-is-my-enemy thing? Why is the president of a country ripped to shreds by a suicide bomber from a movement supported by Eritrea, welcoming the president of Eritrea?

The headlines say they are mending fences.

I don’t think so. Museveni has probably killed as many or more of his citizens than the November bar bomb did. And Afeworki has only a few more civil disturbances to go before he’s indicted by the World Court.

These are two aging dictators who nobody else likes. They don’t have any other friends, and as Libya crumbles, the prospect of their own tenure needs some mutual self-esteem reenforcement. These are not nice guys “working out differences.”

They are bad leaders lagering against twevolution.