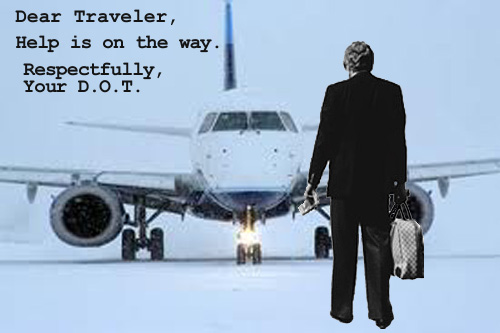 At last! You will finally know how much the airline ticket costs, you will be justly compensated for being bumped or delayed, you can change your mind up to 24 hours after buying a ticket, and more! Am I dreaming?

No. This is what good government regulation means, something that we’ve not had since Reagan fired the air traffic controllers, deregulation buried a lot of good airlines, and big business subsumed what used to be a fun thing to do, fly.

(And imagine, it’s taken the Obama administration nearly 3 years to do this.) The rules were adopted by the Department of Transportation (DOT) in April and come into effect, today.

Well, part of the rules. The airlines objected so incessantly, their lobbyists unrelenting, that at the risk of Congress intervening the Obama administration has delayed implementation of some of the rules until January 1.

Here’s the breakdown: first the rules that go into effect TODAY:

BUMPED
At last U.S. passengers will be fairly compensated, as in Europe. If you’re bumped from a flight you can demand compensation of twice the value of your ticket, if the airline figures out another way to get you to your destination within three hours. This compensation is capped at twice the ticket value or $650, whichever is lower. If the delay is more than three hours, you can demand four times the ticket value up to $1300.

DELAYED BEFORE BOARDING
Unfortunately, a “Passenger’s Bill of Rights” similar to what exists in Europe where specific rules exist to compensate delayed passengers didn’t make it through the lobbying process this time, and I really see this as a terrible flaw in the new regulations.

Compensation for delay remains entirely up to the airline, and in many cases, to the gate clerk handling the actual flight. Flyers advocacy organizations, like FlightMole, have reported recently, however, that airlines seem to be more generous now than in the past, possibly to avoid restarting this debate that they just won. But there are no hard and fast rules. You’ll still have to duke it out at the airport.

DELAYED AFTER BOARDING
Here’s where we won. If a flight sits on the tarmac for three hours or more after the passengers are boarded, the airline will be fined $27,500 per passenger! Now this requires some rumination. That’s a huge fine, even for the airlines. What’s the point?

Not to pay down the national debt. The point is that the flight will now likely be canceled rather than sit forever on the tarmac. Their argument until now was that the flight left (the gate) on time. This rationale released them from their own policies regarding delayed compensation.

No more. It’s now cheaper for them to cancel the flight and compensate you (using their own rules) than pursuing the charade of the delayed flight pulled away from the gate.

EXTRA SERVICE FEE TRANSPARENCY
This actually gets much better in January (if weirdo Congress doesn’t intervene) but today ALL fees must appear up-front on the airline’s website. You are supposed to know precisely how much they intend to charge for that 4-day old tuna sandwich once you get on board. Baggage fees, cancellation fees, must all be clearly shown.

I checked on the American Airlines site. It took quite a while, after actually booking a flight, to get the baggage regulations and I gave up trying to find the cost of the tuna sandwich.

I expect this is going to take a while. DOT is probably doing a better job than I did this morning, and I imagine they’ll be talking a lot with the airlines this week.

But the best regulations, which were initially to start today, have been delayed until JANUARY. Here’s their breakdown, so that you can keep pressure on your Congressman not to mess with them.

JAN 1: TRUTH IN ADVERTISING
I could almost cry. I’ve been screaming about this for years and years. Airlines will no longer be able to advertise a “$99 fare to Las Vegas” when the ticket price you finally pay is over $200, because of fees and taxes. From January on, an advertised fare has to be what you end up paying, taxes and all.

American Airlines has probably been the most egregious in this regards. Almost every AA ticket has an incredible fuel surcharge on it. To Africa, for instance, the fuel surcharge can be $400 roundtrip, so they can advertise a $990 roundtrip ticket to Nairobi that ultimately becomes over $1600, once their fees and taxes are applied.

And American spread the disease masterfully. American doesn’t actually fly to Nairobi, they use their partner from London, British Airways, even though the flight is called and numbered American Airlines (code-sharing).

But British Airways does fly from many American cities through London to Nairobi. So how on earth was it going to compete in the American “capitalistic” market if it didn’t show that its fares were just as cheap as American’s?

So the fuel surcharge and other hidden fees game spread all around the world.

Now (well, in January if Congress doesn’t intervene), this kind of unfairness will be over. The ticket to Nairobi will read $1600 from the getgo.

This is major, and long, long overdue. How on earth can you function within a capitalistic system when you don’t know how much something costs?

JAN 1: PURCHASE INTEGRITY
#1: Right to Cancel: Provided you buy a ticket at least a week in advance, you’ll have 24 hours to change your mind about the purchase for a full refund. This is actually something the airlines have accorded travel agents forever, but now it doesn’t matter how you buy your ticket, you can change your mind if you have second thoughts up to 24 hours after the purchase.

#2: No Increase after Purchase: What? Airlines haven’t been able to get more money out of us after we’ve purchased the ticket, have they? Yes, they have. It’s not that they call you up and politely say, “Mr. Heck, I’m sorry, but we undercharged you for that flight to Cleveland. We have to charge you $20 more.”

What happened was more subtle. That special advertised on the web for $99 roundtrip Cleveland (which became $218.70 after fees and taxes) sold out almost the moment it went on the web. Running planes to Cleveland at that amount is a sure flight path into bankruptcy. So, the airline would cancel your flight altogether.

Sometimes, all they did was change the time by a few minutes and give it a new number.

You would get a polite call with many regrets and assurances that your credit card was fully refunded to the penny. Now, Mr. Heck, would you like to go to Cleveland? We have a flight leaving a few minutes later that is available. Oh, sorry, it’s $50 more though.

No more. Done and gone (well, as of January if Congress doesn’t intervene).

JAN 1: PROMPT NOTIFICATION OF DELAYS
Delayed flights are often known hours earlier than they’re announced. Here’s an example. A snow storm in New York delays or cancels the United flight from Newark to Santa Ana, a daily weekday nonstop that then turns around and comes back to New York.

This is a 6-hour flight on a 737 and there aren’t a lot of other flights into Santa Ana to begin with, so it’s not like United could redirect another aircraft there easily. But common practice has been to get the passenger to the airport even when the delay is known long in advance, and continue to process the flight as if it were on time.

To be fair, this wasn’t just meanness. United probably hoped its genius flight controllers could figure out some way to get another aircraft in their earlier. But now, if the airline registers a delay internally and that delay is more than 30 minutes, passengers must be advised immediately.

There’s more, and it’s all good. If you’re a frequent traveler, you might want to spend a weekend with DOT’s Aviation Consumer website which has all the qualifications and rules neatly laid out.

But the bottom line is a big HURRAY to Ray Hood, the DOT and the Obama Administration for forcing our airlines to be a little bit fairer!

And be vigilant, flyers! Congress can still thwart the whole thing before January first!