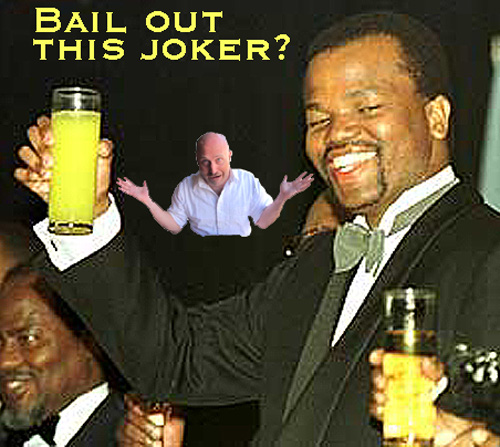 Bailout! Bailout! All Hail the Bailout! Germany for Greece! France for Ireland! EU for Iceland! U.S. for Goldman Sachs! And now! South Africa for itty bitty Swaziland! Is this really necessary?!

Swaziland is a round little hilltop surrounded by South Africa and Mozambique, smaller than New Jersey, with a GDP under $6 billion. Its main industry is absolute King Mswati III who keeps those jobs churning away by building palaces.

There are also casinos.

The King’s piggy bank doesn’t clink, anymore. The IMF refused to bail him out. He turned to South Africa, pleading … jobs.

“A lot of companies are closing down because government has not paid them,” said Hezekiel Mabuza, vice-president of the Federation of the Swaziland Business Community (FESBC).

The king buys a lot locally. He gets good credit.

FESBC has a membership of 500 small businesses, and so far over 50 have closed down because government has failed to pay them for supplied goods and services.

Swazi is one of the most undemocratic countries on earth. Dissent while not sledge hammered away is often harshly suppressed. The country has more or less stagnated as the South African umbrella blooms all around it.

The country’s deficit began exploding in 2009 and hasn’t stopped since, for all the same reasons countries all around the world are having problems: half the debt is basically due to reduced tax revenues and the other half by profligate government spending that continually expected higher tax revenues.

We did it on wars. Greece did it on fata cheese (actually I have no idea why Greece did it). Swazi did it mostly on “Mswati’s profligate lifestyle, which includes building a dozen or so palaces and frequent overseas trips and shopping excursions for his relatives, 13 wives and estimated 27 children.”

On the face of it, it seems ridiculous. Bailout an international Play Boy? But calm down. There is method in this madness.

Because it isn’t ridiculous, or South African leaders wouldn’t be taking so much heat for standing their course. Nobody likes Mswati. But if Swazi were abandoned and the fairyland imploded, there would be a flood of refugees into South Africa at a cost that would easily exceed the bailout.

South Africa’s reasonable rationale is that if they increase this joker’s allowance sufficiently, they will stem the tide of misery that would flow from his subjects into South Africa.

It is the same rationale that applies worldwide. Bail out the people who made those bad mistakes because they’re all “too big to fail.” Without their continued nastiness, all their mess becomes yours to sort out, and that would be worse!

The point is, it’s true.

Swazi has a single university, not bad for a rural backwoodsman cousin to South Africa’s plethora of higher institutions. And rightly so, a large portion of the national budget is for the university. Only this year, it hasn’t received a penny.

So it’s closed down. Swazi can’t afford any more of a brain drain, and there are reports of faculty bailing in droves to South African institutions.

Funding for AIDS education, public health and insurance for preschool children is all gone. If you live in Swazi and have AIDS, a young child with pneumonia or a broken foot, you’ll probably make your way into South Africa, now.

So it makes imminent sense that South Africa plug the dyke.

It’s amazing that so many people just don’t understand these bailouts. Whether it was our own, or Europe, or now South Africa with Swaziland, there’s no altruism here. It isn’t a bunch of pussy footing do-gooders with reckless abandon of their own ethics.

It’s cold hard facts. If you don’t do it, it will be worse for you in the future. That simple.

And another thing. A major cause of all the bailouts, ours and Europe’s and even Swazi’s, is largely ours to blame.