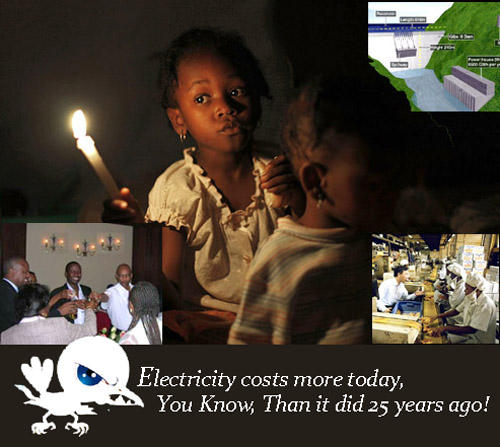 The Ethiopian dam, Gilgel Gibe III, will be 2000′ wide, 734′ high, hold a reservoir 81 sq. miles large, become Africa’s largest hydroelectric plant and some say the planet’s greatest ecological catastrophe. Save the wild, or turn on the lights?

For the mid-term at least (25 years), it will provide enough electricity for all of Ethiopia’s grand development plans with lots over to help neighbors Kenya and Uganda.

It will dam the Omo River above Kenya’s Lake Turkana. This is one of the most remote places in Africa. I floated the Omo as early as 1981, and the peoples who live along it have not changed much since. I often tell tourists that the “village” they want to see near their Mara camp is either hocus-pocos or a living museum, and that only in remote areas of Ethiopia and The Sudan can truly primitive people still be found.

The Omo disgorges into the giant desert Lake Turkana. About the size and shape of Lake Michigan, Turkana is a remnant of a prehistoric Nile river system, and no rivers flow out of it, now. It’s surrounded by harsh desert.

The Turkana people who live around it fish and farm seasonally, in a tight belt right around the lake itself, as rainfall is scarce. But the seasonal floods of the Omo are enough for some agriculture, and the lake is rich with fish: the world’s largest crocodiles live here. Peter Beard’s book Eyelids of the Morning shows a croc from here that is 28′ long. 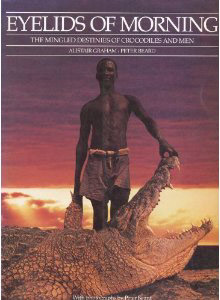 Of course all of this is in jeopardy, now.

Leading the fight against the dam is the California-based International Rivers. They successfully spearheaded a drive that resulted last month in UNESCO and other UN agencies warning Ethiopia it could lose all sorts of funding if it continues with the project.

International Rivers claims that a half million traditional peoples along the Omo and into Lake Turkana will be catastrophically effected. It calls the Omo River the “umbilical chord” for Lake Turkana.

Seasonal farming based on the seasonal floods of the river (very much like the Nile), fishes, wildlife and plants are all doomed if the dam is built, IR claims. In addition to less fresh water in a desert desperately in need of it, the salinity of Lake Turkana will increase to toxic levels.

The dam itself is estimated to cost $1.55 billion. Another quarter billion will be needed for transmission lines.

Initially this was financed by the African Development Bank and the World Bank. But starting several years ago, the environmental impacts seemed so grave western agencies began bailing out of the project. The financing has been taken over by China.

The dam is about half completed, now, mostly with Ethiopian money spent and Chinese funds promised, and it cannot proceed without further cash, so it’s up to China, now. IR and several international organizations are now pressing China to end its participation.

Last month, an Ethiopian journalist who did little more than report all the above, was thrown in jail.

This is a high wire game.

If IR claims are even partially correct, it is Kenya that stands to be most impacted. Turkana’s life-giving water is one of the few reasons the area in Kenya’s far north has not succumbed to the current famine.

But Kenya just signed an agreement with Ethiopia to buy the electricity from the dam.

Africa needs electricity. And presuming for an instant that the Kenyan authorities understand the ramifications, and that there is a real possibility that their northern villagers will be critically compromised, they have still decided to support the project.

Do we stop the dam, save Turkana and condemn Kenya and Ethiopia to reduced development? Ethiopia’s Prime Minister Meles Zenawi, not your nicest character, nevertheless put it succinctly:

“The views of western critics are ironic as Ethiopian facilities are infinitely more environmentally and socially responsible than the projects in their countries, past and present,” he said.

Meles claims the western world is in a conspiracy “to condemn African peoples to extreme poverty.”

Africa needs electricity. Should we stop this, and then fund their nuclear power plants? Or massive solar or wind or other projects that can’t even get traction at home?

“They are concerned about butterflies’ lives, but not human diseases,” Meles says of us.

Numerous organizations have rallied around IR to defeat the dam. Even the palaeontologist Richard Leakey has pointed out that some of the world’s most treasured archaeological sites will be compromised.

Which to save? The past, or the future?