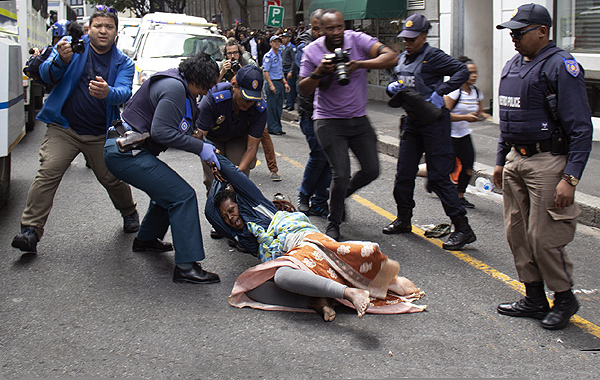 What do you see in the picture above? Snapped by a reporter for one of South Africa’s most read publications, Aisha Abdool Karim is not himself a photographer. This was last week in the very center of Cape Town, St. George’s Mall.

The woman being dragged was a refugee. There is growing xenophobia in South Africa against illegal immigrants, which we know is a worldwide phenomenon. But what does the picture tell you?

Xenophobia lies in the social fabric like the shingles virus in the body. It’s always there, always has been. What makes it erupt is usually stress, and societies all over the world today are being stressed by exponentially more immigration compounded by their own internal political stresses.

Great, so now what to do about it?

No, that’s not what I asked you in the beginning. What do you see in the picture above?

Five police, two who appear to be dragging one screaming woman protester who is screaming over the payment, with the three others looking on. Several traffic police in the background holding back the crowds. At least three police vans used for transporting arrested people.

Right now there is a lot of conversation going on in Cape Town about the behavior of its police, which until these recent immigrant protests were considered among the best in the country.

Writing about this photograph Karim said, “The extreme violence by the [Cape Town police] in removing the protesters … has not endeared anyone to South African authorities.”

Be that as it may, that’s not what struck me about the picture.

As a protester myself in the 1960s, I know that a technique we learned was to fall to the ground when the police came and scream regardless of any pain we did or didn’t feel.

What struck me about the picture was… the pictures. There are three excited photo-journalists there, stooping, hopping and running to get the most dramatic photographs.

Except for one young girl who seems to be running away from the affair, the police gave the journalists wide berth to go wherever they wanted to in this violent confrontation.

I suspect they were looking for the best angle.

To convey to us the truth? To imply a point of pain? Or misconduct? To help us forge a path of reconciliation and good policy?

The media is taking a bashing, today, which in the main I think is very unfair. But what I saw in this picture was incomplete evidence of either wrongdoing or rightful protesting. What I saw were photo-journalists hyper performing their roles, and today their role is to obtain the most dramatic picture.

Drama pervades even the most innocent of circumstances. Capture that nano-second snap and innocent circumstances appear to be world conflicts.

I’m not in the least suggesting that what happened near Greenmarket Square in Cape Town last week reflected bad policing or good policing, bad protesting or legitimate grievance. You’ll have to read about that separately to gather the facts.

I’m suggesting we be careful when informing ourselves of important events with instant messages, like pictures and tweets.