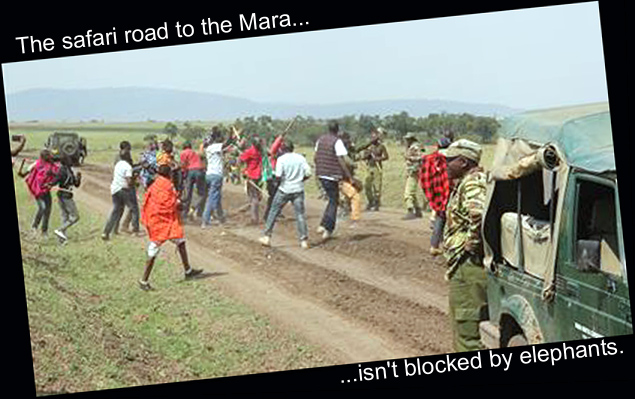 The revolutionary fervor seeping from Hong Kong to Argentina to Mexico has infected Kenya’s most important tourist area, the Maasai Mara.

Younger educated and articulate Maasai ranchers are protesting the contracts that their elder clansmen signed with safari companies that ridiculously are supposed to continue through 2025. Unlike Hong Kong where of thousands of people are flooding into the streets, the Maasai are flooding the tourists areas of the Mara with thousands of cows.

I don’t know if it’s climate change or something more subtle, like education levels of young people exceeding the scam thresholds of their oppressors, but worldwide there is terrible civil unrest breaking out everywhere.

I sympathize very much with the Maasai in the Mara. They’re getting a bump rap. I know because I was a part of some of those so-called “community-based tourism” contracts about 15 years ago.

The Maasai Mara is Kenya’s best wildlife area, hands down. Over the years it got smaller and smaller because the Maasai in the fringes were becoming better and better cattlemen, and their stock needed more range.

So the government-protected areas shrunk to a miserably small 300 or less square miles in the early 2000s and that seemed to threaten the sustainability of this magnificent area.

The magical fix was “ecotourism” and “community based tourism.”

Tour companies with clout approached the various clans and offered them a piece of the tourist business if they regulated their rights for grazing, opening up the majority of space for the wild animals, again.

In the arrangement I was familiar with in the early 2000s, it amounted to about .4% of our gross revenue. At the time it was a fortune to the local clans and it seemed to work so well that Conde Nast named the company I was working for “Best Ecotourism Company of the World.”

Maybe it was back then, and maybe back then it was a reasonable deal.

In 2004 the going auction price of a reasonably health steer was around $350. Today it’s closer to a thousand, and a good-looking Angus can get up to $1500.

But the contracts have changed much. The younger kids, better ranchers and smarter street folks, realize they’re being scammed. Consider the fact that upmarket safari camps like Bushtops or Bateleur, among many others, probably have gross revenue streams amounting to several million monthly in the migration season.

“[The foreign tourism company owners’] children live very well, they attend high-end schools, while ours continue to languish in poverty,” one of the leaders of the protests told Al Jazeera last week.

“So we’re taking our land back from the foreigners to plant maize and wheat, which are more profitable. We’ll do electric fences to keep out elephants.”

“I’ll fence off my land and keep livestock on it,” an older Maasai rancher told Al Jazeera. “We will have no interference with tourism activities. We just want our land back.”

Meanwhile not too far north of the wildlife areas in the Mau forests, Maasai are undertaking another major continuing protest: that of being forcibly relocated by a government desperate to maintain Nairobi’s only watershed area. A Member of Parliament was arrested for leading last week’s demonstrations.

There’s always been some dissatisfaction between the government and Maasai. In 2015 and again in 2017 the main tourist roads from Nairobi were blocked by Maasai protesters.

Now, different clans supported by different modern political parties are at each other’s throats as well.

Things seem different this time. The discontent is widespread and more to the point, the protests in the Mara are a sophisticated organized movement that threatens to close down the Mara for very clear and justifiable reasons. Times have changed.

You can’t keep the Hong Kong free oppressed, anymore. You can’t scam the Maasai anymore, either.