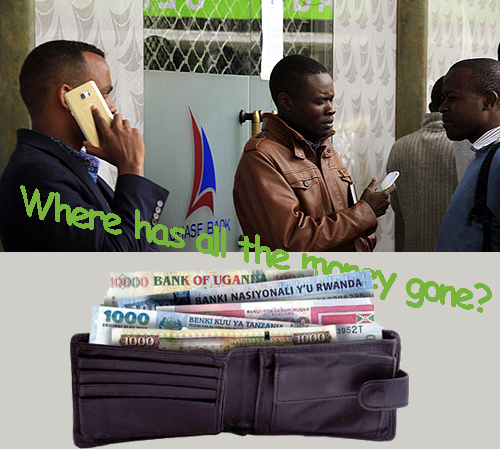 The third major bank within a year has gone bust in Kenya, further evidence that global capitalism has serious problems.

The main cause for the bank’s failure was over lending. That doesn’t sound too onerous to us maverick socialists until you realize that most of that over lending was to the bank’s directors.

Big bonuses for failing performance. Heard that before?

Kenya’s economy is teeny-weeny : roughly the size of St. Louis’. But proportionately banking is just like at home. The seven largest Kenyan financial institutions hold 80% of the country’s cash.

Whether in the U.S. or Kenya human beings who call themselves bankers find themselves swimming in a bunch of money and getting giddy or scared or both and start to gulp some of it in especially after the pool cracks and the water’s pouring out.

Capitalism isn’t what it’s ranked up to be when left uncontrolled whether in Kenya or the U.S. But because Kenya is so small relative to the U.S. the shenanigans are easier to see.

According to Bloomberg, Chase Bank-Kenya restated its liabilities Wednesday: twice as high as filed under tax law less than a week ago. Half of the exploding debt was to directors and employees, originally filed as $3.2 million revised Tuesday to $13.6 million.

Chase is the third large Kenyan financial institution to go belly up recently: Imperial Bank and NBK fell earlier last year. (Chase is not linked to any American bank. Its private stockholders come mostly from Luxembourg and Germany.)

It’s remarkable how this is being explained in Kenya.

One of the bank’s former executives blamed corrupt government executives who have been charged with stealing an educational agency’s funds, which were held by the bank!

As always the small depositors are the ones to suffer. The Kenyan Government would give no date for the bank’s reopening.

In July Global Credit Ratings, a reputable South African financial rating institution, assigned Chase Bank an A- rating with a stable outlook. Heard that before?

This little story in little Kenya won’t gain much traction in the world press. The accumulated losses of this one bank in Kenya are less than what my state loses every five hours.

But we should take note. Big scale or little scale, capitalism kicks the little guy in the butt with a Salvatore Ferragamo. Justice won’t apply, because justice is funded by the same foot. So no one goes to jail, no one does anything but start the whole thing over, again.

I’m not blaming Zafrullah Khan or Jamie Diamond. They’re just necessarily plug-ins to a rotten system. The hydra’s head has many buds.

Kenya and the U.S. have upcoming elections. The U.S. is first. Kenya modeled its banking system on America’s, so maybe it will follow the U.S. election outcomes in the same way. Always has in the past.

Ray of hope? Feel the Bern?