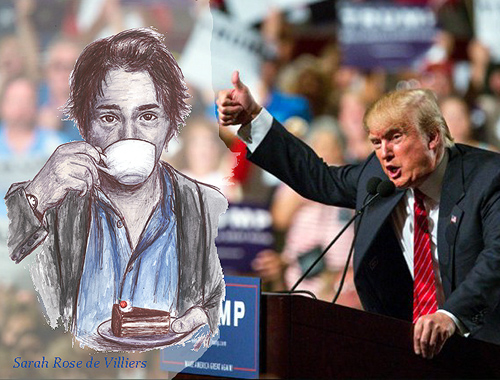 Like Donald Trump unexpected and near violent political events across Africa are dying down but not going away.

I suppose it’s natural to make comparisons between where you’ve been for a long time and your home, but I’m incredibly struck by how Africa and America seem to have stopped moving. At least the places I know:

Lots of poignant news in Africa – like Donald Trump running for President in the United States – broke around the middle of last year:

Student protests across South Africa, the final end of ebola, the certain pacification of Mali and Somalia, the certified end to Boko Haram’s rule in northeast Nigeria (in fact, the possible essential ending of terrorism continent-wide), the final criminal verdicts in Kenya’s leaders’ trials, and perhaps most representative of all: the imminent death of 92-year old Robert Mugabe.

Mugabe is not dead, although he’s uncharacteristically quiet.

Student protests continue in South Africa, although no longer as disruptive. There is certainly some peace in Mali and Somalia, but there are also incessant suicide attacks. Today the criminal court in The Hague will likely string out further the Kenyan Vice-President’s trial.

And so it goes. Donald Trump is still in the race, but … less so?

What is it about our times that reflects such ennui? “Are everyday women suffering from a bout of fashion boredom?” a reporter in South Africa asks.

“There is a sense of ennui and foreboding,” one of South Africa’s tourism consulting companies says.

“Last year’s feel good combination has now changed to one of wait-and-see in the United States… Experts indicate that there are multiple clouds on the horizon: …an unstable European economy, recession in Brazil, low employment rates, a slowing down of the Chinese economy.”

I randomly picked a grad student’s dissertation at Stellenbosch University, submitted in December. Stellenbosch was where some of the most violent and successful student protests were launched last year:

“…many of us are struggling with the questions of meaning and purpose. And, like the Hamlet from Act One, we conclude that there is no meaning, no purpose, only vague and arbitrary laws and expectations (formed by God or society, which may end up being the same thing) that keep us on the beaten track of existence.”

One of Africa’s most vocal revolutionaries is a professor at Rhodes University in South Africa. I have followed Richard Pithouse for years. He is quick witted, extraordinarily articulate and until recently … hopeful.

But lately his calls-to-arms have morphed into unsettled poetry that belies malaise:

“People are gathered on the street, the street that became the primary site of insurgent student assembly over the last week. Four women, two students, an academic and a priest speak on… The ancient, it seems, is entwined with the hip.

There is a lingering drought in South Africa. There is no new rain on the dry Karoo.

Let’s hope this is simply all impatience and not dismay. Today is yet another media-insisted Waterloo Day for Donald Trump. Jacob Zuma might wake up tomorrow and resign. Students at Stellenbosch might have their fees waved. The real culprits of Kenya’s 2007 violence might confess. Tanzanian legislators might pass a new, wonderfully democratic constitution.

It will start raining, again.