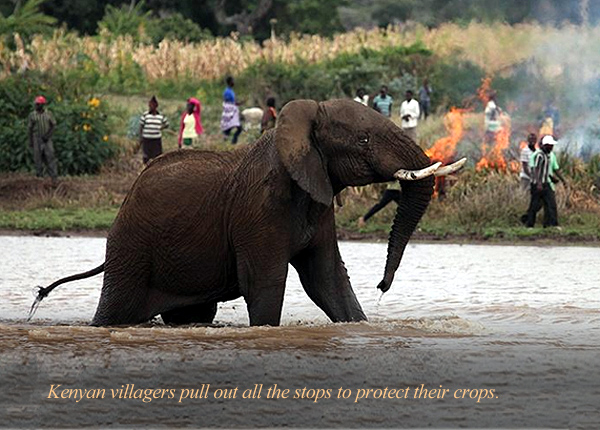 It’s immoral to support saving wildlife at the expense of saving people. It’s that simple and today in Kenya I realized first-hand this travesty.

Much of the precious wilderness that protects the planet’s biodiversity is located in the developing world. Here the weather is literally killing millions of people: According to the International Medical Corps today, 13 million people in East Africa require food aid right now.

This drought is not like past droughts. It’s more severe and when it breaks – as I reported in the Serengeti last week – it collapses into flooding. Moreover, the micro-climate aspect to climate change throws chaos over regions that normally shared a single climate.

This is today’s result of man-induced accelerated climate change. As I read of the millions of people here in Kenya daily effected I understand better than ever how immoral it is to deny climate change.

So obviously it effects animals, too. And as humans and wildlife are increasingly stressed, they often take it out on one another. Human/wildlife conflicts are unusually severe, now. They are the result of people and their stock intruding into areas previously reserved for wildlife, and just as seriously, wildlife intruding into areas outside their reserves.

Last week in the Serengeti I reported how few baby wildebeest we saw, and how the greatest numbers we found were unusually at this time of the year in the central Serengeti.

According to Tanzania wildlife officials, this is because the wildebeest are delaying birth because of the drought. Worse, Maasai herders who have already grazed out their own lands are moving into the preferred southern grasslands that the wildebeest depend upon for the special nutrition the mother wildebeest need to generate milk for their babies.

“This is the first time this is happening and we fear that [the] increasing number of livestock, especially cattle in Ngorongoro, has also scared the wildebeests from venturing further south, where livestock have eaten all grass,” a TANAPA official told Nairobi’s main newspaper.

Throughout many other areas in East Africa, the reverse is also happening: wildlife intruding on populated areas in search of food:

In northeast Kenya eight people were killed and another two dozen injured mostly by hippo and buffalo. Similar reports have been coming from all the areas of the country where wildlife reserves adjoin heavily populated areas.

The drought began last year when the “short rains” (Nov-Dec) failed completely following very poor “long rains” (Apr-May). A news report last September of the killing of a high school student by an elephant went viral, and the anger of Kenya’s local people has mushroomed ever since.

Wise conservationists urge calm and argue that both wilderness areas and local towns and villages can be protected and assisted. But they are drowned out by big organizations using climate change and this particular crisis to raise money.

National Geographic routinely reports on the devastating effects climate has on wildlife, but rarely on the effects to the human population. The World Wildlife Fund (WWF) pleads for your specific donations in three animal areas, without a mention of the much greater needs of the local humans.

How would you expect a local Kenyan to feel reading these appeals?

I, as an American, feel embarrassed and ashamed.