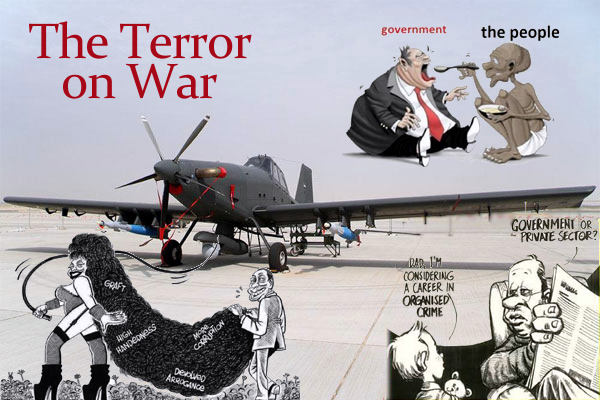 You think Africa is corrupt? Spend just a minute reading this.

The day before Trump was inaugurated, the U.S. State Department approved a sale of military aircraft to Kenya that reeks of corruption and graft. It’s not clear yet if the pushed-through deal is Obama’s, Trump’s or yet to be named Texas Congressmen.

The deal was not announced until after Trump was President: up to 12 specially converted state-of-the-art crop-duster AT-802L’s and 2 AT-504 trainer aircraft for $418 million.

The sale was approved as part of the Obama Administration’s war against terror in Somalia, which Kenya is fighting as proxy for the U.S. In this murky arrangement how much Kenya would actually end up paying, how much might be generously financed, or how much would simply be written off as a defense expense of the U.S. is not clear.

The deal has not yet been signed by Kenya.

Five Congressmen have since requested the Government Accounting Office to explore the possibility that this is $181 million more than normal. Put another way, $181 million would go for something other than military aircraft.

The sale was awarded to a Texas company, L-3 Technologies, that spent $458,700 on campaign donations to U.S. Congressional candidates in last year’s elections.

The controversy is wrapped up in a turf war between North Carolina and Texas Congressmen. Budd’s constituency includes the Carolina company, IOMAX, which was once closely associated to L-3 but had a falling out last year. IOMAX can make the modifications but not sell the shell aircraft. L-3 sells the shell aircraft but cannot make the modifications.

Budd is suggesting that the $418 million included $287 million to IOMAX for the modifications, which will not happen now that the two companies have separated. The total State Department award of $418 million was solely to L-3.

Neither company, nor the Kenyan officials involved, would talk to Kenya’s main newspaper about the deal which in all likelihood is now walking dead.

This is a perfect illustration of how corruption so often ascribed to Africa begins with the corrupters, in this case, the Americans.

Who knows where millions might have gone unfairly if this deal went through. Indeed there could be Kenyan officials with big pockets who would have looked away when the uncustomized aircraft capable of doing nothing but spraying crops arrived later this year.

Perhaps L-3 would have pocketed the premiums to pay more campaign contributions.

Perhaps State Department officials, who had to have understood this situation, were playing for favors with Texas, or shunning errant North Carolina, or positioning themselves in some complex maize for the arrival of Trump, or fleecing their own potential as lobbyists before being dumped by Trump! I’m not even convinced that the angelic Congressman Budd would have said a thing if the contract were awarded to IOMAX instead of L-3.

We may never know. What you’ve got to realize is that these things happen all the time, and they are as infuriating to me as they are to someone who elected Trump to stomp out this kind of routine, establishment graft.

My principal point is that Africa is not one nano iota more corrupt than America. And this is the way it happens, again and again and again, Obama or Trump or Mickey Mouse.