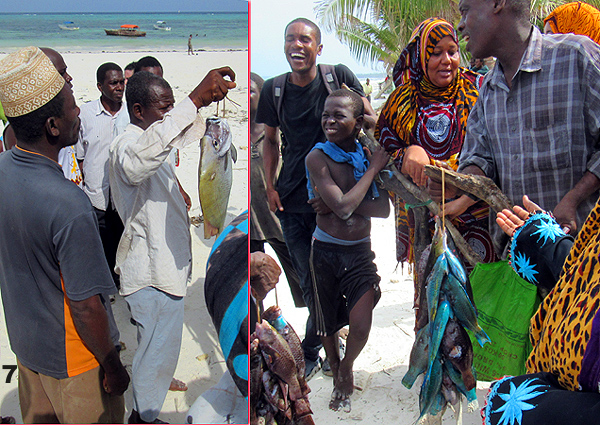 I followed the fishermen of Matemwe Village, today. A wonderful guide, Omari, took me in his pretty fancy boat with its 20 HP engine, a virtual yacht compared to the ngalawas working the reef.

(I’ve numbered the many pictures I took that accompany this and posted them on Facebook. See AfricaAnswerman on Facebook for the photos.)

When Omari (Pix 1) was a boy and all his family were fishermen, a hundred ngalawas from the village went out at low tide every day to fish the fecund Mnemba coral atoll. They figured out themselves that they were fishing out the area, so they took the incredible step of limiting the number of ngalawas fishing each day to around 50.

That sounded rather too utopian perfect, so I queried Omari further. He reminded me that Zanzibar was a deeply communist country even after it federated with Tanganyika to become Tanzania in 1974. Hmm, perhaps, but there is more to the story.

Tourism began to explode in Zanzibar right about the time the village decided to limit its own fishing. Omari and others like him actually found better jobs in the tourism industry. As we motored past numerous fishermen Omari shouted respectful Swahili greetings to them and they answered likewise.

The fishermen were very old and very young and everything in between. They poled their boats known as ngalawas (Pix #2) with incredible difficulty into the kaskazi wind that was still blowing strong from the north. Before climate change it would be moderating by now, and the kuzi winds would be starting from the south. Didn’t really matter, because when they came back in the afternoon the kaskazi slid them into port at a fraction of the time!

Water flowed out of the break into the sea almost at the speed of a rapids. The tide here is radical. So it’s pretty easy for 4-8 guys in an ngalawa to jump out and simply slide with the boat into the beautiful atoll waters.

Once in deeper waters (Pix #3) inside the atoll they opened their sails and headed all over searching for grouper, kingfish, billfish, sailfish, dorobo – all sorts of stuff.

They were all men. I saw only one woman in a boat, but there were many woman and men, too, who weren’t in ngalawas but just walking the emerging reef. There were groups of 4-6 women trolling nets, young boys spear fishing, and many others just with bags and good vision and quick hands. So I’m not sure how idealistic we ought to get about Matemwe’s self-regulated fishing.

We left the fishing fleet to join a bunch of about a dozen other tourist boats, and I dived over to swim with bottlenose dolphins for a while before heading to the very edge of Mnemba Island. This is where the last good coral is found, and compared to my many years of diving and snorkeling here and elsewhere in the world, a sad experience. But!

Please if you have never snorkeled a reef before, book a trip this instant! It’s still an absolute paradise of life, more colorful and odd than anything you could possibly imagine.

I fell into a school of several hundred larger sergeant fish (perhaps scissortail sergeant) and immediately started waving my fingers until there were just too many nips!

I saw all sorts of damsels, zebras, bannerfish (including angel fish), several types of butterflyfish including the weird looking longnose, surgeon fish, dottybacks, tigerfish, skunk fish (along with all sorts of other anemone fishes) and the really weird trumpetfish, several outstanding parrot fish and who knows what else but lots of them.

We found gobbies buried in the sand, octopus that looked awfully menacing to me and once I raced towards a school of at least a thousand larger beautifully yellow and green anemone fish only to unwittingly swim through an unusual group of jellyfish. Oops.

That, too, is a result of climate change. Jellyfish are not supposed to be here now. I didn’t get stung by the medusa (the thing you know as a jellyfish) but I must have swum through billions of their larvae as I suddenly felt electrified. The stinging only lasted five or so minutes.

Here’s the point. You’ve got to see this! But I saw only two batches of red coral, no green coral, mostly purple and dead coral. Worldwide the coral is dying, the sponges and sea urchins are flourishing, but the overall biomass is nose diving. I know it will not dip below the threshold of your absolute amazement before you go, but take note.

So we headed home. I ate and lounged on my verandah until the fisherman started coming home in the high tide.

I raced down the beach to Matemwe village just as most of the fleet was getting back (Pix #4). Fisherman literally jumped out of their yet to be moored vessel to run towards the market shouting “Wait! Wait! Look at mine!” (Pix #6)

There were two auctioneers and buyers surrounded them (Pix #8). Most of the buyers had come from restaurants in Stone Town.

The auctioneer would take a bunch of fish from a fisherman and hold it high then often make jokes (Pix #7):

“OK, gentlemen, what will you bid for this whale!” or “Ladies and Gents, come round, I’m holding up a Spanish Deep Sea Treasure what you say for it?!”

Then once someone shouted some bid, off the auctioneer went just like auctioneers everywhere in the world, egging up the price. The person who won the bid paid the auctioneer (Pix #5) who deducted some amount before remitting most of the sale to the fisherman.

Octopus and flounder commanded the most. I’d guess up to Tsh 1000 for a single normal sized catch (about 45¢ and they probably weighed a couple pounds). Squid was abundant (Pix #8) and expensive, too, about Tsh 600-800 per fish. Sometimes really heated arguments developed when someone who thought they got the bid didn’t, because the auctioneer either hadn’t heard them or who knows why. But the auctioneer ruled and his decision always prevailed.

Once the buyer had his fish, most of the time he (or she, there were a couple very elegantly dressed ladies from Stone Town buying fish) would go to a pavilion where boys filleted and prepared the purchases (Pix #9).

What’s amazing, of course, is how lucky I was to see this! It all absolutely depends upon the tides and I just happened to be here when the tides worked beautifully during my day.

The ngalawas go out about an hour into low tide and return about an hour after high tide begins. So every day the whole process up to auction takes about 8 hours, and the auction really only about an hour until everything is sold. But so it has gone, probably for more than a thousand years…

As the world warms, the coral dies, the fish diminish, fewer ngalawas will sail the atolls and villages like Matemwe will disappear. Some think that’s natural and OK. I don’t.