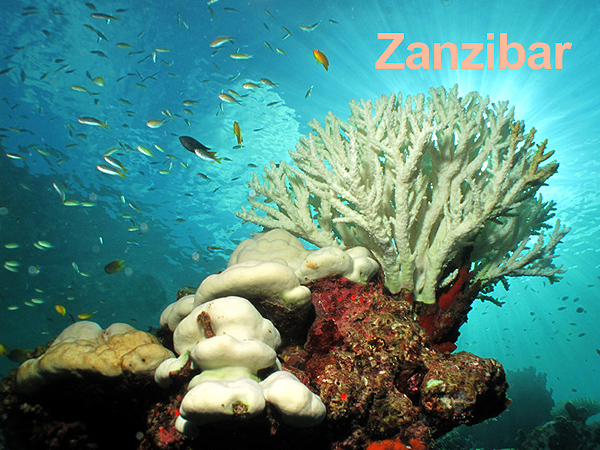 It was a splendid morning in Stone Town with calm winds and few clouds that might be suggesting the monsoon is changing and the farmers will soon have rain.

We flew northwest from Zanzibar towards the mainland in perfect weather at low tide. The seas were azure blue and numerous sand bars emerged surrounded by coral … that was mostly dead. Like my experience at Mnemba atoll a few days ago, it was heart-breaking.

I remember many times flying this route, most recently last August. But then it was high tide and difficult to tell. Now there was no mistaking. The great stands of coral were all brown. Perhaps as in Mnemba there were purple and darker corals hard to see from the air, and perhaps as in Mnemba bits here and there of a few healthy stands. I’m no scientist, but the view was unobscured reef death.

What is particularly sad is that Zanzibar is considered to have some of the world’s healthiest reefs, although this assessment comes from a very, very small body of work. Tanzania just doesn’t attract marine biologists as it should.

Compared to the Great Barrier Reef, Zanzibar is a needle in a haystack. And where I’ve been staying, Mnemba, seems to have no scientific studies at all! So be cautious about my pessimistic assessment from a single look.

Nevertheless, two catastrophic events have been scientifically documented that hit Zanzibar in the form of barreling El Ninos, first in 1997/98 when reef mortality reached 80% in many parts of the Tanzanian coast and its islands. A second blast hit just last February and continued through June. Both times sea temperatures rose 2C above normal, which is nearly unheard of.

The scientific publication, Conversation, published an article whose title said it all, “Coral reefs off Tanzania’s coast are being destroyed, most beyond repair.”

The most intense study done in the area is actually one of fishes rather than corals, and as a result of that catastrophic 1997-98 event. The Marine ecology study presented “evidence of severe and long-lasting secondary impacts of a catastrophic bleaching event, with no apparent recovery.” “Bleaching” is the scientific term for the death of coral.

There is some good news in all this misery, but it is on the west side of Zanzibar where many fewer tourists visit compared to the heavily used north and east side.

Scientists continually working at the Chumbe Island Coral Park since 1992 claim to have recovered 80% of the original reef found here. It is considered by the few scientists in the area to be the healthiest reef around if not stable.

Part of its success may be that the usually paranoid government of Zanzibar allowed the United Nations to establish a management program free of local government involvement. Chumbe remains today part of the United Nations Environment Programme and as such immune to the fickle decisions of a government often obsessed with tourism, fishing and other money making opportunities.

Another scientist currently working off the nearby coast of Dar-es-Salaam, Tanzanian Leonard Chauka, recently told a scientific magazine that he will soon publish the results of a mid-term project that has restored more than 5,000 meters of mainland Tanzanian reefs that suffered the 80% mortality from the event last year.

So there is a hint of good news, but no one pretends that global warming – which is the most serious culprit – will be reversed soon enough to matter. So the clock is ticking, and as described in that fisheries study, no coral, no fish, no livelihoods for tens of thousands of Tanzanians.

How fast will this happen? Quicker than a generation, most agree. It’s one of the most easily demonstrable crises of global warming. It’s something that even a non-scientist like myself can see.

We’re probably beyond any value in changing the minds of deniers. Just as coal miners whose coal will no longer be used or factory workers displaced by robots, Tanzanian fisher families must now learn new ways of surviving. Even if Sen. Inhofe sponsored a carbon tax, today, it’s probably too late for the Tanzanian reefs.