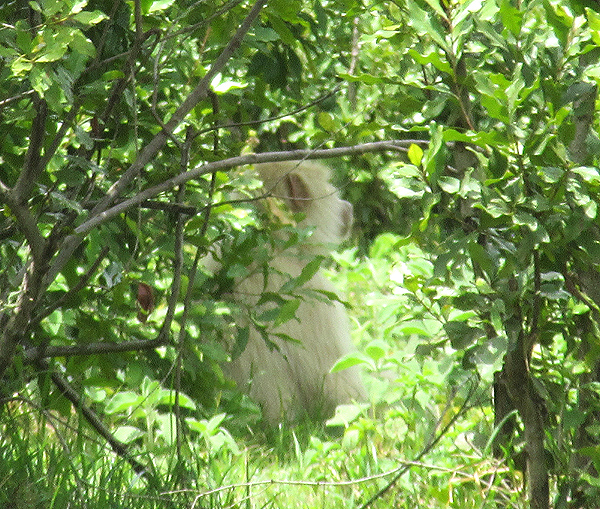 Can you see what we saw today?

Forgive my poor little sure-shot photo at 60 meters, and I’m sure my clients got much better, but I wanted to race to print with this. I’ve seen and photographed all sorts of unexpected animals: white lions, silver lions, white giraffe, the weird almost white zebra I wrote about last week, even a white wildebeest. But never though I’d see an … albino baboon.

Most of the unusual animals I’ve found are not albinos, because their eyes have pigment. They are melanistic and anti-melanistic or some such thing. But this baboon’s eyes had no pigment, his ears (despite my photo) were pink. His hands were pink. His butt was pink. He was an albino.

Unusually pigmented animals, especially the very rare albino, do not normally do well. But this guy seemed very healthy and mature. He walked with stature in his family, but we noted he always sat in the shade. That would be hard for baboons who often scour the open plains for bugs and seeds.

But not hard for where we were: Arusha National Park. It’s a highland rainforest park, and if I hadn’t seen this creature I would have been telling you how we lucked out finding the black-and-white colobus monkey. Twice! How spectacular they were posing for us.

But this likely will be the highlight of my year, if not years…

Albino animals are probably mostly rarely seen because they don’t live long. Like human albinos, the sun is a danger, and yet here they try to live under the most powerful sun on earth, the equatorial sun.

Like human albinos, the unusually pigmented animals I’ve seen are often shunned by others, perhaps not for the emotive reasons that human society shuns albinos, but shunned nevertheless. The white wildebeest that Tumaini and I found – in the midst of the migration! – moved along with his hole of ‘unoccupancy,’ which was at least 20-feet in diameter, as it walked along with the herds that were otherwise nearly shoulder to shoulder.

Perhaps it’s simply the oddity of the appearance of the animal combined with the obvious familiarity of smell and sound that makes its brethren so cautious.

We weren’t long enough with this guy to really figure this part out. We were actually leaving the park by an unusual route to head overland to Kilimanjaro where we are tonight. Tumaini saw it about a hundred meters away.

He was with a relatively small-sized family, perhaps 30 individuals, but while they seemed no shyer than most of the baboons in the park, he would also walk from shade to shade. That made viewing and photographing him difficult.

Neither he or any of the family seemed any more spooked by us than any other baboon family. They were moving and feeding as is customary. Altogether we watched him for only about ten minutes before the family moved deep into the forest.

I have been countless times in Arusha National Park and Tumaini even more! It’s a small park. I think we both know every junction, every track, every meadow. We recognize certain individual animals from former game drives.

But not this. All I can figure is that the mini-drought of February forced this family to travel a long way, from where ever they had been to these mountain heights where more water and food would be certain. It was good move. It’s rained well recently in the park.

(In fact it seems like rain has come to all of northern Tanzania. As I write this in my beautiful tent at Ndarakwai Lodge the endless rolling thunder of a 20-minute rain is slowly coming to an end, the bulbuls and white-eyes are singing praises, and the guinea are clucking their good fortune, and the veld smells so beautiful. We are going out soon for sundowners under what will undoubtedly be an unimaginably beautiful sunset.)

What a day! What an experience. And this was my current group’s first game drive!

Africa is an never-ending series of spectacular surprises. This old white guy had beat the odds for maybe 7-10 years. He came and went through our amazement, bringing the rains and dragging the peace he’d somehow found in this splendid universe into a thick forest then disappeared all too quickly. His brief appearance seemed suddenly unbelievable, like a myth that challenged a bad memory that no one would ever believe. I think that’s the way he wanted it. Should I thank the Cannon sure-shot for defeating his spectre?