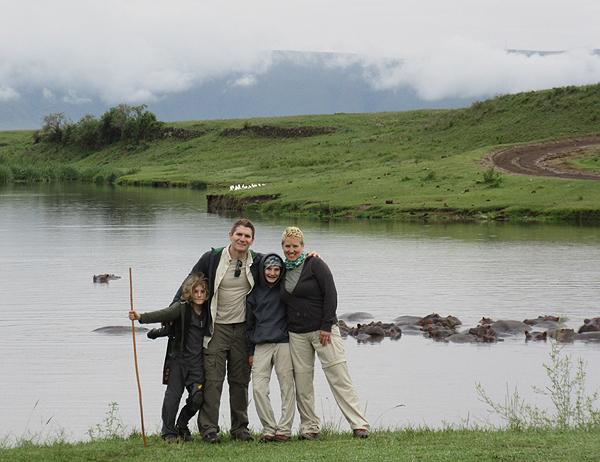 Evan got up at 5:55a (according to Evan) and was in the car with the rest of us at 6 a.m. It had rained so heavily during the night that my room attendant told me several bridges had been washed out.

Normally when we descend the crater at dawn the long drive to the “down road” is slow and difficult because it’s so foggy. That wasn’t the case, today. Normally it’s bitter cold (relatively speaking, in the 40s). Today it was in the upper 50s.

Dawn was just breaking as we started down the road. Zebra peppered the hills above us just before we entered the cloud zone. As we emerged underneath the cloud, the beautiful crater veld displayed a green so many people had been hoping for, for so long.

We headed to the toilet at the bottom of the down road and since we were the first down, I urged caution. Well urged, by the way, as Evan was the first to discover that something other than a tourist or ranger had used the hand sink as if it were the primary equipment of the facility.

On to the veld and hardly a few feet forward at our side on the road were two tawny eagles defeathering an Abdim stork and eating it! I’d really been dismayed, by the way, that we hadn’t seen any Abdim, which are migratory storks from Europe that we usually see in the tens of thousands.

I don’t think their absence was do to a tawny feast, but these two guys were not going to give up their prey despite a giant Landrover looming over them. Finally one of them dragged what was left of the Abdim a few feet further onto the veld.

We then came across lots of wilde with babies, and that was really good. We had found the migration several days ago seeing thousands of wildebeest, but only a few small groups with babies. This first group in the crater presaged the rest of the morning drive, with dozens of groups of mothers and babies.

Wilde babies are really hyper in the morning, jumping around and running aimlessly. One stopped himself in disbelief hardly a few feet from my window and looked at me with those giant black eyes until Mom blarted him back. By the end of our game drive in the afternoon, the babies were all lying on the ground, their feet curled under them.

Like everyone in the crater we were searching for its prize, the black rhino. There are only a handful of places left on the continent where black rhino are completely free-ranging, and the crater has the greatest density. The parks won’t release the actual number but we think it’s 19.

So we headed to the Lerai forest. There’s only one forest in the crater and it’s not doing well. It’s full of very mature giant yellow-barked acacia, the fever tree, and no young ones. The old towering ones are dying. In fact one giant had just been pulled off our road probably having toppled in the storm.

The forest is where many of the rhinos spend many nights. They feel safer in the trees than the open. The forest is also the most used home for the big tuskers that migrated down into the park in the horrible years of poaching in the 80s.

Presumably those trophy elephant came down into this elephant unfriendly environment because it was safer from poaching. There are few trees and bushes in the crater. It’s why there are no giraffe or impala, and elephant join them as browsers.

But being safe was apparently more important than being full, and even after poaching was under control and many other elephants were coming and going all the time, the original big tuskers just stayed and carried on, having learned to survive by grazing rather than browsing.

We saw quite a few of the old guys, but none with super tusks. As each safari goes bye I see more larger tusks in places like Tarangire than in the crater, a great affirmation of how quickly a population restrengthens following a setback.

Tumaini was the first to spot the rhino, and then with my binocs I confirmed it was two, a mother and a calve. They were quite distant, perhaps 400 meters, and lying down. The prize had been found and the Lavallee’s were now the proud consumers of a true Big Five Safari.

Although we were the first to spot the rhino, that wasn’t the case with the lion kill. Across nearly a third of the crater I spotted the collection of rovers massed near the Muinge River. I knew there was a big pride that lived there, it was still early morning and likely there had been a kill.

It was a zebra and about 3 hours old because the kids had already feasted until their bellies were bursting. There were two groups of cubs, one about 7 weeks old and another about 9 weeks old, and they are always the last to eat.

All their bellies were already huge. They were still waddling around with parts of the tail and ribs and who knows what else in their mouths. Several adult females watched them intensely, occasionally ignoring their own exploding guts and growling before one more chomp.

We then headed to our picnic breakfast, enjoying a wonderful spread of food as 20 or so hippos boomed their guttural grunts. Flocks of pure white cattle egret ringed the far side of the lake contrasting so beautifully with the deep lush green of the saw weed and papyrus lining the edge.

We circled the whole crater and then left after a fabulous morning returning to a late lunch at Crater Lodge. The kids then spent some of the afternoon learning bead making from an old Maasai lady and tonight we enjoy our last dinner together.

Normally at this time of the year the crater has about 20,000 animals. I reckon there were about 8,000. Fortunately the rains have come at last. The crater looks beautiful and even normal. But it will take another full season of normality to repopulate the veld with the regular numbers of herbivores and birds. This was a serious dry spell. Let’s just hope the climate trauma is truly over.