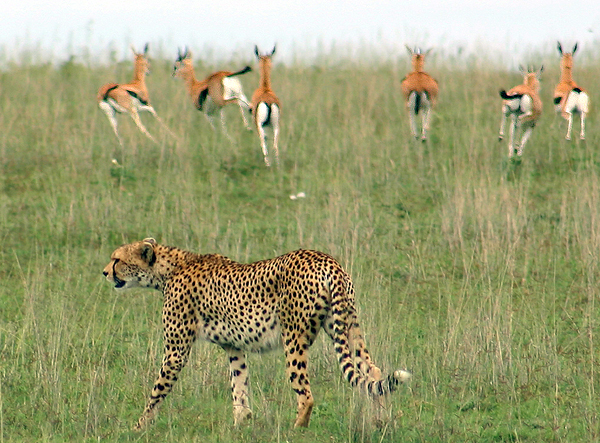 It rained all night. The unending thunder and lightning kept Tammy awake for much of the night and me worrying about what we were going to do the next day.

We went to the nearest ranger post and got careful directions to the next post down the line, joined a convoy with another vehicle headed in the same direction and sloshed our way from Kusini back to Ndutu.

Although Ndutu was where a hurricane dropped on us three days ago, it was now considerably dryer than the wetland we had just motored through. So I was hopeful we could turn south and search the Kerio and Kesikio valleys for more of the migration. But no, said the ranger, those areas were flooding.

Climate change is severe and often surprising. In the past the rain came, probably just as much if not more, but over massive areas of the veld all at once. Now we have these little micro hurricanes and ten miles away the drought continues. It’s confusing us guides and it’s confusing the animals.

So we changed our plan so that we could use the better gravel roads to the crater. Momentary stop, however, as we spotted three cheetah in the distance in front of a bush.

At first I didn’t think anything would happen. The two teenage cheetah were rolling on their backs, swatting Mom and looking for all the world like they were already well fed. But patience is the hallmark of cheetah and so we waited, too.

There were tall patches of dead grass between the cheetah and the gazelle, a distance of about 150 meters. Raised in our vehicle we could see everything directly on. I think the gazelle, resting in the grass, saw nothing of the cheetah.

The baby, by the way, was doing what all recently born baby gazelle do, hiding in the grass. For the first ten days the baby gazelle has no scent and so lying low and quietly is its best defense. Mom returns to nurse only a couple times in the course of 24 hours. So the baby’s behavior was no indication that it knew the cheetah were nearby.

Finally Mom started to slowly walk towards the gazelle. The kids followed dutifully at the same speed but slightly behind.

She walked so slowly it was hard to tell for sure she was walking at all. Several times she would stop and sit up and survey the scene with the gazelle still unawares. I think probably she reached a spot where the grass was certain to hide her. We just couldn’t tell from our position.

She narrowed the gap to about 75 meters before there was any indication from any of the gazelle that they were disturbed. But the large male Grant’s seemed suddenly more alert. He didn’t get up, but he shook himself from his languor and was turning his head looking about.

Mama stopped and the kids practically flattened in the grass.

Then she moved slowly forward again. 70 meters, 65 meters … she had to get closer than 50 meters to even try a run. I could see now that there was a clear patch of grass that would absolutely reveal her to the gazelle. Not clear from our position whether that was close enough or not.

When she reached that patch she started the run. It’s absolutely spectacular to watch. She starts routinely enough, hardly more than a fast dog trot. I think during these first few seconds she’s gauging exactly her trajectory and speed. She has to come along side her intended prey and then trip them, since her speed is far too great for her to grab the animal.

I could tell as she moved into rocket gear that she wanted the mature Tommy. She might have decided that it was too dangerous to try to bring down the large male Grant’s with his huge rack, particularly with two lanky teenagers around.

The male Grant snorted loudly as it lept upwards then ran in a diagonal direction to the Tommy, and suddenly Mom was headed right toward him. She moved into warp speed which is when her front and hind feet outstretched make her look like a totally flat flying carpet.

Then the baby gazelle got up and ran.

I can’t be sure, even though she chased the male Grant’s right by our car but I think that the baby distracted her. In any case she went hardly another 30 meters passed our car and all three gazelle were long gone.

She simply flattened, normally exhausted as a cheetah is after an attempt, out of breath like you can’t believe. It would take her now 10-15 minutes before she could even get up and move. The kids trotted towards her to offer sympathy, I guess.

We moved on. Evan said it was sad the cheetah couldn’t eat. Sophia said she was so glad the Mom failed. It’s illustrative of the feelings we all have. But this is the wild, and everything seems to eat everything else in order to survive.

We’re at the fabulous crater, now, as the family ends their safari at the luxurious Crater Lodge. We go down game viewing tomorrow. Stay tuned!

[The picture I’ve posted is by Bill Melville on an early safari I guided. I’m afraid none of us got pictures of the event. That sometimes happens when you’re so excited!]