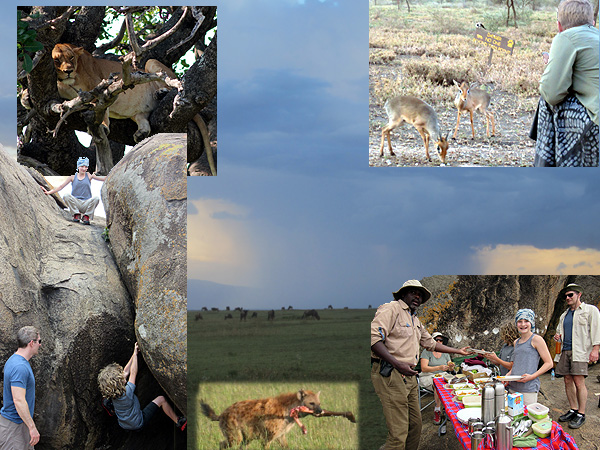 Our last of four days in the Serengeti and we packed lunch for a long excursion to where we hoped to find the great herds. Hardly ten minutes out of camp and a baby wildebeest ran pell mell across our path.

Two minutes later it came back and we screeched to a halt as it faced us square on from the middle of the road. It had lost its mother and was starting to imprint on us. Only a hundred meters away five hyaena woke up and stretched their massive necks towards us.

One hyaena began running towards us. The baby looked away from us at it, then tore around the car, the hyaena following, then headed towards a ridge but that was directly into the other four hyaena.

Clearly the hyaena were full. They couldn’t help raising themselves off the ground to enter the chase, but the baby wilde ran right through them all literally into the sunset.

A quarter million wildebeest are born every year during this time of the migration, and in the course of a year, a quarter million die. This baby won’t survive. Even if it outruns the hyaena, there are lion and leopard and a hundred other dangers, and besides, no other wilde will nurse it.

We drove another 80 minutes through the beautiful Moru kopjes seeing many giraffe, warthog, some impala and our first topi. We found more lion along the way, too, including two magnificent males near Lake Magadi. Only half way between the Sopa road and Seronera, we found the herds.

It was absolutely the migration, the greatest wildlife spectacle left on earth. Wilde and zebra stretched north to south from Seronera to Naabi. But they were stressed, widely spread out and clearly not in good shape.

There was a dearth of yearlings and those that we saw had ribs showing. Very few babies. I expect that the great herds have fractured all over the place. Perhaps we saw a tenth of what exists, and perhaps the rest are scattered hither and yon searching for grass.

The Seronera River was horribly shallow. We saw several dozen hippos at various locations and half of them were dead.

We saw leopard and leopard kills, more lion, and another serval! A stressed situation like this for the great herds is a heyday for predators. But most of all we saw hyaena after hyaena after hyaena, bloated gluttons everywhere. Our car pulled right up to some lying in the mud, and all they could do is drool at us, unable to get up.

But there is good news for the herds. On our second day in Ndutu, we were relaxing after lunch in our rooms when the heavens exploded. It was like a hurricane. Sheaves of water fell from the sky. I watched a poor water dikkop as the storm began, fluffing happily its feathers and turning into the rain then a few minutes later being blown off its feet into the bush.

The thunder never stopped. It was like one rolling avalanche after another. When it finally did stop Ladd, Evan and Sophia came down to my room in their bathing suits!

The next morning the veld was green. The tiny tissue paper flowers were blooming. The wild hibiscus buds ready to blossom yellow at ditch edges were waving in now dust-free morning splendor. The birds were singing: I heard at last the rufous-tailed lark, the Serengeti’s trademark. I hadn’t seen a single weaver until now, and now dozens were carrying threads of grass to the trees to weave.

A single downpour was all it took, but the next day the sky also darkened and let go over the Ndutu Plains, as it did today when we returned from the center to our camp at Kusini.

So I think the drought’s over – at least on the so important southern plains. I think the herds will move there, now, and regroup and strengthen on the most nutrient grasses in Africa. Check my blog regularly to see if I’m right, because I return here in two weeks with my next safari.

Meanwhile we enjoyed the Welcome Center at Seronera and the great Ngong Singing Rock, where we set out lunch despite a spotted green bush snake beautifully around a low-hanging bush over our path.

The kids climbed the rock. None of us got bitten by the snake, and the day ended back at our wonderful camp with distant thunder over the Ndutu Plains.