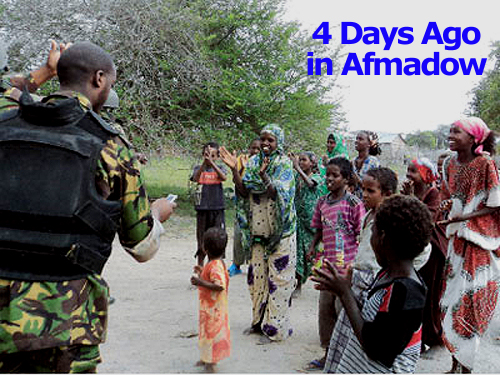 Has Kenya accomplished what the world’s great powers have been unable to do for the last generation: Is Somalia really headed towards peace?

Last week, Kenya successfully routed the insurgents from Afmadow, the last insurgent front before the rebel coastal capital of Kismayo. Today, Kenya’s major newspaper reported that “Al-Shabaab leaders are reported to be fleeing Kismayo, heading back to Puntland or leaving the country for Yemen.”

And all sarcasm aside, America’s NPR asked in a quick headline this morning “Has peace really come to the Somali capital of Mogadishu?” and implied yes, because a new dry cleaning service just opened up there this week.

Before this little business opened up, NPR went on to explain, businesspeople had to get their suits cleaned in Nairobi!

I was very skeptical of “Linda Nchi” the name Kenya has given for the operation, which roughly translates as “Protect the Nation.” Click on the Somali link to the right to read my pessimistic report after report. Will the occupation of Kismayo by the Kenyans – now widely expected – prove me wrong and Kenya right?

Before any mea verbum I have to increase my potential humiliation by also pointing out that America seems to be the principal paymaster (if not quarter master as well), info supplier and stealth assassin of top al-Qaeda and -Shabaab leaders.

Without U.S. assistance, money and assassinations, Kenya probably would have been dead in the mud last fall.

Does this make Kenya the lackey of the U.S.?

Many have argued this since this beginning. But that rude presumption I discount out of hand. One of the greatest motivations for war, or no war, around the world is the incredible cost of the host country’s dealing with refugees from a neighboring country’s violence.

It’s why South Africa continues to prop up Zimbabwe, why China continues to pander to North Korea and why Turkey is so aggressive in its stance against Assad’s Syrian regime. And there is no stronger example than the nearly million Somali refugees that have been taxing the Kenyan government for several years.

And much of this time has been exacerbated by drought.

Without America’s help, I think Kenya would have made the move.

So we won’t call Kenya America’s lackey. But I will insist that America is Kenya’s paymaster, info supplier and stealth assassin. And I don’t think there’s any question that without this assistance that Linda Nchi would not be the success it is, today.

As an American, I’m not necessarily proud of this. As a self-adopted Kenyan, I’m thrilled and scared.

Guantanamo is still open; Afghanistan still bleeds profusely and any day, now, we’re going to see a drone over Syria.

And the reason America has lost or bungled so many wars, is because the people it fights are locals who have gone to the ballot box with their lives. What right do we have to impose our ideas on others? Human rights? Is our definition of individual human rights, or the UN’s, sacrosanct? Absolute enough to kill someone local who believes otherwise?

No. We are learning better than ever right now that democracy is terribly flawed. What’s the point in democracy if you can be swindled to vote against your true self-interest? It’s so easy it’s criminal. The right wing in America is the most successful brainwasher since Mao.

But it isn’t easy to lay down your life for what you believe.

Josef Kony’s child soldiers were brainwashed, and when they laid down their lives it was a tragedy, not a heroic statement of their beliefs. But the vast majority of al-Qaeda and al-Shabaab fighters are not brainwashed. They may be economically subverted, but I have little doubt that their reasoned beliefs carry them to war.

When they blow up the Twin Towers, we should retaliate, and we did. Because the Golden Rule Analog prevails: If we let you alone, you let us alone.

But the extent that we then go to insure it against happening again, is as insane as the amount of money an American must spend for medical insurance.

America is obsessed with everything being black or white, Left or Right, Progressive or Conservative, and compromise in my generation has become a naughty word. This obsession has led to an inability to discern the truth, a paranoia of failure, a self-cycling decline in happiness. It has taken America to war too many times.

And from my point of view, Obama has not changed that. He has been coopted by America’s obsession with war.

But Kenya, sweet Kenya? Are you really accomplishing what America never could? Have you been crafty enough to use America’s obsession for a war so that you can really win one?

Oh I so hope so. But it isn’t over until the Fat Lady Sings. And as far as I know, the work hasn’t yet begun on the opera house in Kismayo.