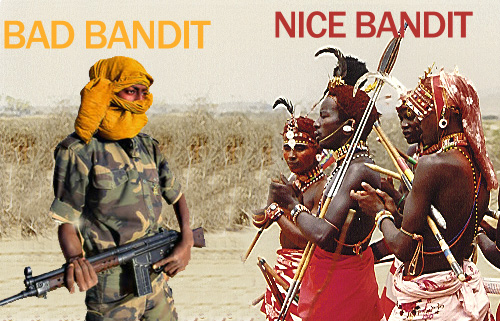 Just as Russia’s leap into modernity created a powerful mafia, so it now appears that Kenya’s is doing the same. And for travelers this unfortunately means you can no longer travel overland north of Mt. Kenya.

I’ve found myself becoming peculiarly cautious in my golden years, so I reflect when I was a twenty-something year old gallivanting through Idi Amin’s very dangerous Uganda, or even daring to cross the Omo in the presence of desperate, armed thugs. So jungle on, you young’uns, but keep your eyes wide open.

And if you’re one of my clients, I’m afraid we’re staying clear. Of where? Of some of the finest wilderness left in Africa: Samburu and Laikipia, to be precise.

Now there’s still a very safe way to visit these places: fly in. If you fly into the reserve’s airstrip, I’m absolutely confident that you’ll be as safe as the Queen of England shopping at Harrods. But that spectacularly gorgeous drive off Mt. Kenya onto the Great Northern Frontier, or those amazing landscapes between Samburu and Laikipia seen only from the ground … it’s over. At least for the foreseeable future.

This past weekend saw one of the most spectacular, clearly well planned cattle raids ever seen in the history of Kenya. Seven people were killed and scores wounded and a thousand cattle whisked away.

Now admittedly this particular raid is pretty far from tourist areas, but its size got me, and it’s one of a series of raids that’s been increasing in the area. Last year, for instance, there was a gun battle in broad daylight right on the bridge over the Ewaso Nyiro River at Archer’s Post.

This is the only way tourists can enter the area overland.

The weekend raid is about 20 miles from where Joy Adamson was killed by bandits more than three decades ago.

And that’s what gives me perspective. The “Northern Frontier” has always been a lawless land. It’s just too hard to patrol. I remember only 4 years ago having to charter an aircraft for a group of only 11 of us who wanted to drive all of 20 miles from Samburu to a lovely retreat in the Mathews Mountains, because bandits had been sighted on the road we were scheduled to drive.

But bandits stopping cars and taking an occasional goat are way different from what is being reported in today’s modernizing Kenya.

Second, it’s rather hard to conceal 1000 cows. These guys had multiple trucks, using the new Chinese paved road built through the desert to whisk their booty into the markets down south.

According to the police commissioner of the area, law enforcement was outgunned. Shotguns against AK47s.

Recognizing this danger was coming, the Kenyan Government has been aggressively trying to disarm everyone in the area. But according to Member of Parliament from the area in which this giant raid occurred, Abdul Bahari (Isiolo South), “people in Samburu have not been disarmed and even if they have, we have not seen the effect as they seem to have guns during the raids.”

And playing to his constituency as I suppose he has to, a neighboring MP, Adan Keynan (Wajir West) continued during the press conference with a warning to the government.

“We’re giving them seven days, or else we’ll tell our people to protect themselves. We cannot be perpetually talking to a government that does not see, does not hear and does not sense the value of life,” said Mr Keynan.

The drought has something to do with this, of course. It makes the weak, weaker, and it makes the markets more ready to take on stolen goods.

And finally what concerns me most is that the old days’ criminals were very respectful of us tourists. Sometimes, it took a bribe, but nary a hair was mussed. I felt we were respected as distant foreigners interested in a distant land, and part of a movement that in the end everyone living in the area really gained from.

A thousand cattle is a hefty haul. You’d have to have a pretty good tourist season to reach that booty. So I just don’t want to be on that new Chinese road when these guys are in the midst of a heist.