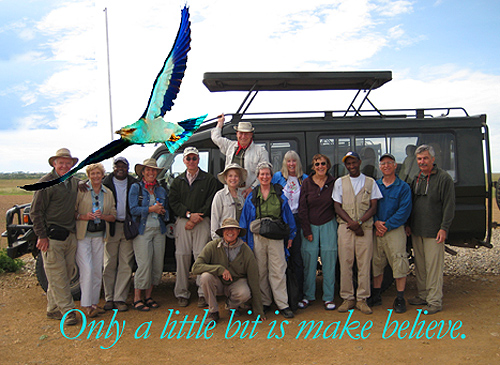 Starting tomorrow I will be on safari in East Africa and blogging four times weekly from the field … I hope. Cell phone and internet reception has improved so much I think it really will be possible. We have an exciting safari ahead of us!

It is also a remarkable collection of people, and I’ll try to give you little snapshots of each of them as the days go bye. But I am already specially indebted to newly weds Kim Fasani and Chris Benchetler, who are taking part of their honeymoon with the rest of us.

What did I say? A honeymoon couple joining a bunch of us who are into planning our Golden Wedding Anniversaries? (As happens from time to time, I do slip into a minor exaggeration.)

More specifically, age rarely matters in my groups. Last year, for instance, I actually guided a 7-year old. (He was traveling with his mother.) More to the point, EWT operates a lot of honeymoon safaris, but not really very many where the honeymoon couple joins a group.

But Kimmy seems so incredibly enthusiastic and eager to get virtually everything out of the trip she possibly can, that when I mentioned my safari was more or less overlapping hers, she (presumably pulling her spouse along) jumped aboard!

Don’t get overly empathetic. The two of them do have enough sense to peel away from the group trip at the end to enjoy a most romantic getaway on a remote beach in Zanzibar. (My heart pines remembering those days!)

And, by the way, they won’t be the first. But they do join a very special group of people I’ve had distinct pleasure over the years guiding and getting to know. Their honeymoon is obviously more than just a place to wipe off rice granules from rented garments. They’ve come to be thrilled and to learn something new.

And actually, honeymooners seem to stay in touch a bit more than others. I’ve now followed the first honeymoon couple I can remember guiding through two Labrador Retrievers, then two kids, several houses and jobs, and now … the kids are in college!

My group this time also includes a couple from New York, from Florida, and several from Ohio, so together with Kimmy and Chris who are from a remote locale in Montana, we have a rather wide segment of America on board. The 12 of us are expecting some extraordinary experiences!

The focus as always is on seeing the wild working its miracles and exercising its inexorable power. Although there has been unusual rains this season in areas where it normally doesn’t rain after June, the dynamic of the dry season still appears firmly in control.

That means the veld is getting stressed out, and that means the predators are in their heyday. Of course it remains to be seen, but I expect we’ll see 75 or more lion, at least one leopard and up to a dozen cheetah.

The climax of the trip is in an area where we expect to find part of the great wildebeest migration, at its northern most point, before the herds begin to slowly reassemble themselves in the southern Serengeti. This is always a dramatic time for the migration, with exciting river crossings.

I’ve already heard from friends that the crocs are pretty full and so the river crossings are proceeding without much ado. When they first wake up begin earlier in the season, they are famished, and carnage reigns. We probably won’t see that, now. The big crocs eat only once or twice a year, when the migration comes and goes. They gorge, then basically go to sleep for months.

I’m especially anxious to see the state of the elephant herds in Tarangire. There are too many elephants and have been for the last 5-10 years. We need signs that the population is stabilizing and not continuing to grow, and Tarangire, where we should see (yes) a thousand or more will have the best indicators.

So stay tuned, folks! It’s possible the blogs might not come quite as regularly, but I promise whenever in range to top up each day’s experiences with as much truth as I can possibly muster!