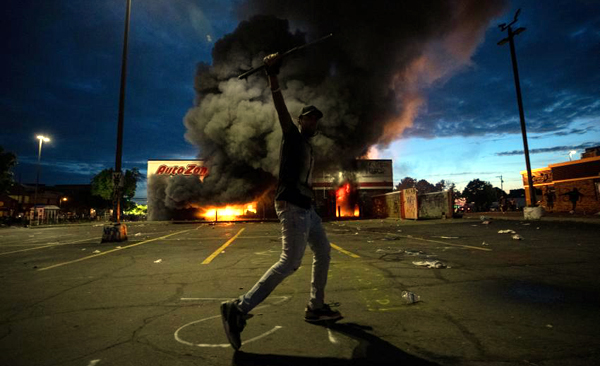 How often have I winced angrily when an African leader decries his out-of-control society for being manipulated by “outside agitators.”

I’ve been in conflicts in Ethiopia, the Congo, Rwanda and Kenya, and virtually every time – 100% without fail – the leaders blame the unrest on outsiders. It becomes laughable. Until you realize that it’s the best way to make things worse. After all, we’re all outsiders.

I remember waking up to heads (of humans) speared onto the top of the flags of the Hilton Hotel I was sleeping at, then to hear the government report that it was done by “outsiders.”

The most amazing example, though, is the start of the genocide in Rwanda. The Hutu-controlled radio beamed loudly that the president’s plane was shot down by “outsiders,” a very poor English euphemism for Tutsis since the Hutus and Tutsis had been living in the same little area of Africa for nearly a millennia.

Nota Reversi: Only before the Charlotte massacre in August, 2017, when a very public “Unite the Right Rally” was broadcast nationwide to bring together every possible armed miscreant in the region might you believe that unrest is due to “outsiders.”

And even that is questionable since we don’t really know how many answered the social media calls and really did come from afar.

Now I find myself lambasting the right for blaming “Antifa.”

So where is Antifa located? Who is their leader? Their operational book is often cited as Dartmouth Professor Mark Bray’s, “Antifa: The Anti-Fascist Handbook.” But if anyone would take the time to read it, this is history of anti-fascist groups back a hundred years with no diagrams for making Molotov cocktails.

So some kid proudly telling a local journalist that he’s “antifa” doesn’t a terrorist organization make.

Like many of the right-wing bikers who herd themselves into civil rights’ marches, the agitators who travel some distance to loot or destroy actually don’t seem very well organized. I’m not disparaging all their motives. I can imagine some truly believing that anarchism is the only next step.

Even the “Unite the Right” rally which is perhaps the most organizational disruptive protest in years was formed by all sorts of malcontents whose ideologies despise organization. This means they aren’t very effective. Random rarely achieves success.

Too uncoordinated, too individually reactive “anarchists” are missionless. You won’t find an angry young woman throwing a Molotov with a carefully thought-out plan for building society in her back pocket.

But the key, here, is the divisive nature of blame-shifting onto non-existent “outsiders.”

We’re all responsible for each other and ourselves. If there’s some bloke from Houston bragging about this destruction in Minneapolis, we absolutely need to worry about that. Not because of where he’s from – he’s from America – but why he’s so motivated to travel so far to destroy.

There are, of course, a multitude of simple answers to that question. People who have nothing to lose are great risk takers.

But from my point of view a person who has nothing to lose is a product of a crime against humanity. Society has failed him. As long as we depend upon our society for anything, we’ve failed those who are desperate to destroy it. We become the criminals.

And boy, are there a lot of visible failures out there at the moment.