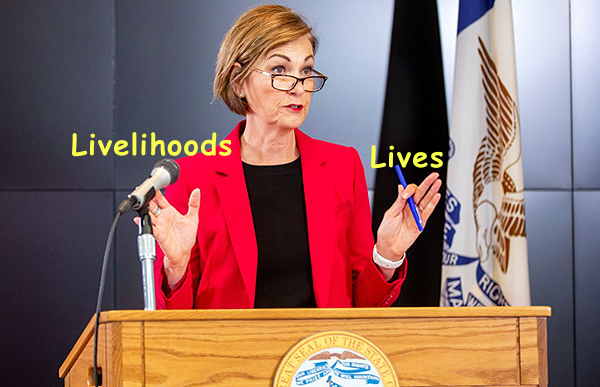 A refreshing optimism is leading to an unspeakable heartbreak.

The “opening up” of almost every part of the world irrespective of its virus case situation brings much hope to those out of work. This is most clear in my trade in Africa. “Out of work” is bad even for the car company executive, but on an individual level what may happen in Africa is exponentially more terrifying than here at home.

Few are as transparently crass as America’s Iowa governor who said yesterday she would “protect both the lives and the livelihoods of Iowans,” then quickly adding, “We can’t prioritize one over the other.”

Yesterday I spoke at length with one of the executives of an important Tanzania airline. His 15 planes would normally now be ferrying 300-400 tourists daily around Tanzania. His fleet is maintained by a much larger organization in Nairobi with dozens of employees.

The pilots, check-in staff, office staff, mechanics, warehouse managers for this single relatively small company easily runs into the thousands. They aren’t the stereotypical farmer in the bush. They have nice houses with mortgages, cars to upkeep, children to send to school.

The collapse of the tourist industry effects tens of thousands of well-off Africans, and the tableau I create comparing them to any middle class American collapses dramatically with time.

America is no social paradise. Our social safety net in many respects is more like Africa than Europe. Nevertheless, the difference is cosmic.

It would take several years for an American living in the suburbs who lost his job to be kicked out of his house onto the streets scrambling for fallen fruit. It would be even longer before the electricity turned off, the water stopped running.

It’s much, much less than that in Africa. I don’t dare predict how much less time, but I know it’s frightful. And as that time approaches the Africans with any means whatever will leave. Those who remain won’t be enough to keep their industry going well when a recovery actually occurs.

So it’s completely understandable that any glimmer of improvement is exaggerated. It’s true here at home, too; it’s just that the consequences of this naivete won’t be as catastrophic.

So I’m besieged every day with emails from safari vendors still standing welcoming my clients back with open arms. The well-schooled and experienced executive I spoke with yesterday thought tourism would definitely improve by September.

At home so many are sure that their kids will go back to school in September. That they might, even though they shouldn’t if today’s trends continue.

Our premature opening-up will lead to spikes in cases and deaths, leading in turn to strains on the health care systems, but American defiance knows no limits. The prevailing culture began long before its master, Trump, demonstrated to the world that you just keep lying long enough to make it true.

The foil for this 1984ish mindset is among us. Sorry you redneck conspiracists, the virus is after all of mankind not just you. Americans will endure in relative terms many more fatalities and long-term miseries as a result of this virus than the seemingly more humane places like Kenya and South Africa.

Yet there’s every indication that this suicidal mission is as strong in Africa as here. It’s just that they won’t last as long.

When it’s over and the dead are swept up and the abiding injured marginalized, an America not completely dissimilar to the old one may reappear.

That’s hard to imagine in Africa.