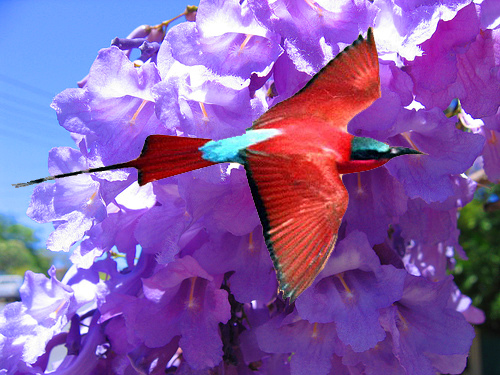 I sit here watching a miserable cold rainy day waiting for snow. Birds (and “sunbirds”) living here in the Midwest have all but gone. But one remarkable bird in southern Africa defies this classic “going and coming” in a most spectacular way!

The southern carmine bee-eater is not only one of the grandest and most beautiful birds in existence, but it defies all notions about what bird migration means. Right now it’s heading south, but in hardly a few months it will head north further than where it started from! Then a few later, west, and finally, east! It zig-zags in a definite way, but why?

Conservationists tend to think of bird migrations as one-way reversibles. In other words, at one season they travel thata-way, and on the other season, they go thata-way backwards! Well that’s mostly true, and it seems to us that the birds are following the weather. We think, for example, that cardinals own fur coats but that little warblers would just freeze to death if they stayed.

Wrong. Temperature has absolutely nothing to do with where a bird wants to be. Birds follow their food. Reductions in temperatures reduce the food supply for many birds, like warblers eating bugs. But cardinals don’t eat bugs; they eat seeds and berries, and they’ve adapted to finding them even in the snow.

The carmine bee-eater’s there-again, back-again migration is linked in the same way. The bird is a specialist: it eats bees and other flying insects, and in southern Africa flying insects – particularly bees – are very much linked to when it rains. And the rain pattern in the southern part of the continent as I often explained is very complex.

And to make matters more extreme, the carmine nests in burrows of sand often on flat sand banks, digging a tunnel up to 6-feet long in which to lay its eggs. You can imagine this would not be an ideal strategy if it were raining.

So breeding occurs at the driest of times, along the great southern rivers like the Zambezi and Kavango, in August and September. There’s no drier time anywhere in southern Africa.

Eggs hatch, chicks emerge, rain comes, bees flourish all up and down the Zambezi as the ground bushes and native flowers in particular bloom presaging honey. But this doesn’t last long, because the rains grow intense, the temperatures rises, and many of the species of plant flower for a very short time and then just blossom out in bushels of thick green foliage.

So now in November the carmines move south. It’s probably started to rain south in South Africa by now, but down there many of the flowering trees like the jacaranda bloom before heavy rains, unlike the bushes along the Zambezi, and this attracts billions of bees.

One of the most beautiful sites on earth is the carmine bee-eater flying around a purple jacaranda tree! Its mostly crimson body blends into a deep teal head and underside, and with a sea-faring like deep black bill more normally associated with terns.

OK, so it’s spectacularly beautiful, but that’s not all. Its flight is magical. It’s in the class of birds that, true to name, eat bees and other flying insects. It plucks its prey right out of the air, nabbing that darn honeybee while it’s in flight.

This leads to all sorts of gymnastic swoops and backups, sometimes seeming to turn 180-degrees in midflight. And it seems to use its wings very little, a sort of effortless soaring that with a few facile flaps turns it upside and backwards, or sends it in exactly the opposite direction.

But one of the most amazing things about this bird is its migration. So right now it’s in South Africa with its new fledglings doing a job on the jacaranda. That only lasts a few months, and heavier rains and other factors bring much of South Africa out of bloom by February.

The fledglings are then fully grown. The birds actually maintain social groups even while migrating, and the young boy carmines have stayed with their mom and dad, and the girls have gone off to another group. And they get ready for the big migration as the flowers fall in South Africa.

They now travel long distances, sometimes right up to the equator. That’s nearly 2500 miles. I’ve seen them around Lake Victoria in February and March.

February is the lull in the single rainy season throughout most of East Africa. It’s actually more than a lull in Kenya, where it becomes completely dry, but I’ve only once seen a carmine north of Nairobi, and that was a single so obviously errant bird.

The lull in the heavy rains allows so many plants to bloom! In East Africa it isn’t just bushes but trees as well, and sometimes the many varieties of acacia will actually bloom a second time (most acacia bloom just before the rains begin in December and January).

So, lots of bees.

The rains end earlier in southern Africa than East Africa, so the carmines stick around in East Africa until like the wildebeest they’re forced to move because it gets bone dry. Wildebeest move north; carmines move south.

The carmines have 2-3 months now of little pickings, but there’s enough. Flying insects other than bees become their main diet, and there’s enough to build a new home and have new chicks.

In the end, the carmine has traveled as far as many of the longest distance warblers. It’s just not up and down, but a zig-zag through the remarkable ecology of this magical continent.