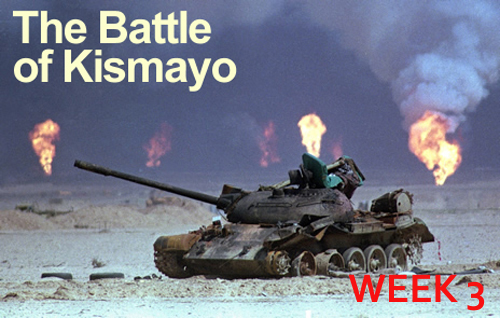 It’s clear that a major battle is brewing, but it isn’t at all clear who is going to win. America is worried. Kenyans are growing increasingly anxious. More deaths, including tourists.

The Thursday afternoon killing of a safari vehicle driver in the Shaba Reserve, and the wounding of a Swiss tourist inside, has no clear motive. There is no clear evidence that it is linked to any retribution from those Kenya is fighting in neighboring Somalia.

The safari vehicle was on a routine game drive and was returning to the lodge when several gunmen opened fire. The driver accelerated the vehicle but there was a second batch of gunmen waiting and they pummeled the vehicle with additional gunfire.

The driver was killed, the vehicle rolled over, one tourist was hit by a bullet and one was uninjured. Kenyan Wildlife Service agents at Archer’s Post were first on the scene.

Nevertheless this is exactly the area that I warned was unsafe only a a month ago. Whether these were bandits or ideologue militias doesn’t really matter. Kenya’s rule of law is falling apart as all its resources are funneled to the conflict in Somalia.

Go back and read the hostile comments I suppose understandably left by Kenyans who read that article. But wouldn’t it have now been much better if all had taken heed, and the tourist was now not dead?

Definite links have been established, however, with additional kidnappings around the border area of foreign aid workers, and of a grenade attack on a church in Garissa, a major town not far from the Somali border.

Meanwhile, the Kenyan offensive seems stalled. This is my view, not the view expressed by the Kenyan military, which claims to be on track in its liberation of Kismayo.

The army, though, has not yet even taken Afmadow, a northern town distraction that Kenyans learned was being fortified by al-Shabaab militias, and which they announced they would first have to pacify before continuing the progress towards Kismayo.

In the course of last week, French fired from naval vessels into Kismayo and America launched drone attacks from a base in Ethiopia. Kenya claimed a number of small skirmish victories, but its army does not seem to be moving.

This could be because of new reports of how heavily fortified Kismayo has become. During an African leaders conference last week, Prime Minister Raila Odinga literally pleaded with the west for more assistance.

Meanwhile Kenyan society is growing increasingly anxious with the war.

“The worst case scenario,” writes blogger Abdi Sheikh, is that Kenya gets deeply embroiled in the “conflict for years and disenfranchise both Kenyan Somalis and Somali refugees living in Kenya.”

“Any major mistake will bring the conflict into Kenya,” he goes on, and “may also stir xenophobia against Somalis living in Kenya.”

That may already have happened. Additional police are seen regularly in the densely populated Somali suburb of Eastleigh in Nairobi. New government policies demanding Kenyan Somalis disarm themselves are likely only going to inflame the situation.

One thing everyone seems to agree on, which I don’t think is quite as evident as presumed is that “Kenya has taken an action that is irreversible” (Abdi Sheikh). “It has sparked a war with a shadowy group that has no clear frontline. This means those responsible for military action must think carefully not to create new enemies or inflame the conflict further.”

And yet if it isn’t reversible, it may be doomed. Sheikh reminds us, “There has been no foreign military invasion that has ever been successful in Somalia.”