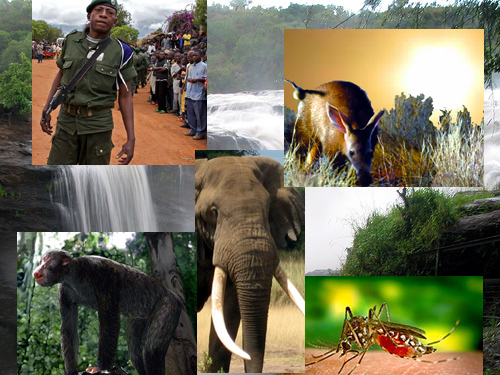 Tense peace in The Congo, despair with ivory smuggling, ownership of The Nile, more pieces to the early man puzzle and break-through yellow fever research round out 2014’s Top Ten Stories.

[For the summary of all Top Ten Stories in 2014 click here.]

Actual war in The Congo is over: my # 5 Story for 2014. The central government of the DRC in Kinshasa, far far away from the conflict area, won and with massive international assistance peace will ultimately emerge.

For the time being the area is as ravaged as West Africa was and we know what that means. So even as enough peace has settled on the region conservationists are now reappearing to try to save some precious pieces of wilderness, gun battles are common.

But they are not organized, rather individuals who know nothing but war and whose leaders have disappeared. Oil companies are back prospecting, exiled leaders are returning and I believe a vicious conflict of nearly 30 years is truly ending.

Some will argue that increased elephant poaching and ivory smuggling should get greater attention than “just” my #6 Story for 2014, but as readers know, I feel this story has been massively exaggerated.

Elephant poaching is rising, and it’s distressing enough that some aid groups rightly so are withholding assistance until countries – particularly Tanzania – establish firm policy to stop the increase.

On the other hand, I believe there are too many elephants. When more attention is placed on protecting elephants than sustaining the development of the growing populations of increasingly unemployed people around the elephant habitats, the formula is set to increase poaching.

I take strong issue with those who compare today’s crisis with the one in the 1980s and 1990s. Back then it was corporate, global criminal action and the methods of stopping it were much easier than today. Today’s solution requires massive local economic reforms with a new emphasis on sustaining the development of the local communities at which today’s poaching originates.

Despite recent finds suggesting massive acquirers may exist below the Sahara itself, east and southern Africa remain dependent on the water sheds of the Great Rift Valley, and a huge percentage of these ultimately flow down The Nile towards Egypt.

When Britain was formulating independence for its many colonies in the area it structured a treaty in the 1950s that has governed the use of The Nile until today. But Ethiopia’s massive new dam, Tanzania’s recent announcements of its own new hydroelectric policy and Uganda’s incompetence at the headwaters at Lake Victoria are all on a terrible collision path.

Egypt has even threatened war, although that seems almost comic. What is not humorous is the fact that contemporary society is draining the Nile fast, and my #7 Story for 2014 is the increasingly dangerous tension in the area as those countries involved seem unable to find a common policy.

Global warming is a global issue and might rightly be considered the world’s most important issue right now. I’ve written often about its effects in Africa, even those immediate ones that have effected me while on safari.

This year, however, scientists have finally concluded that it is global warming more than any other single dynamic that is reducing Africa’s great animal populations and at a rate not seen before.

It isn’t just the big and visible animals, of course, but I felt this the #8 Story of 2014 because it lends much explanation to why we are seeing fewer lions, why birth rates in endangered species are declining in the wild, why nocturnal animals in particular are on the decline, and perhaps even why elephant poaching is so high.

My #9 Story of 2014 is a wonderful discovery by a group of paleontologists working in East Africa on pre-hominin fossils.

For a long time the modest creature proconsul who lived as long as 25 million years ago was thought to be the precursor if not the actual “lca” [least common ancestor] to humans and apes.

The rub was that of the many proconsul fossils found none were from a forest environment where it is known both apes and man originated. This year it changed with new evidence that proconsul did exist in the forest. This may seem an arcane fact to many – it isn’t like a whole new species has been found – but it ties together so many presumptions about early man that it absolutely ranks in the top ten!

Finally, my #10 Story of 2014 is how new genetically overseen medicine has provided striking new opportunities to control one of Africa’s deadliest diseases, yellow fever.

Yellow fever is transmitted like malaria through a mosquito, but intricate new understandings of how it works is leading scientists to completely new methods of treating the disease. These are true break-through determinations and the opportunity at last of curing rather than just controlling yellow fever outbreaks have appeared on the horizon.

There are, of course, many other important stories in 2014, including the continuing rise of dictators, the tedious story of corruption, the buffoonery of South African politics and the increasing disengagement of China from Africa after several decades of intense involvement.

In some ways all important stories are linked to all other important stories and for the casual reader the excitement and intensity of my first top ten, albeit chosen by my own deeper interests, might hopefully lead you to a better understanding of Africa as a whole in 2014.