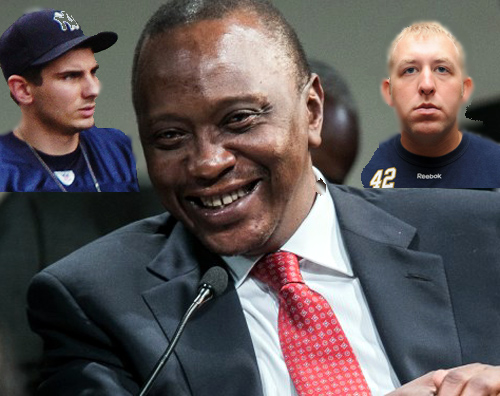 The President of Kenya is not quite a wholly free man, but a war criminal is no longer charged, and iniquity has trumped justice.

The dropping of charges against the President of Kenyatta is my # 4 Story for Africa in 2014. [For the summary of all Top Ten Stories in 2014 click here.]

Early last month the International Criminal Court at The Hague dropped all charges against Uhuru Kenyatta, the current President of Kenya, after a 5-year prosecution of crimes against humanity.

Kenyatta is guilty. Whether he should ever have been prosecuted is now another question, but the ICC’s flipflop is as much a statement on the feasibility of global justice as it is on Kenyatta’s culpability.

The President of Kenya, the Vice-President of Kenya and originally four other high officials plus a local journalist were all charged by the ICC for being the key masterminds in the horrible violence that wrecked Kenya following its flawed 2007/2008 national elections.

About 1200 people were slaughtered and equally awful were the near quarter million who were displaced of which more than a 100,000 remain displaced, today.

The agreement brokered by the U.S. and Britain between the warring parties established a coalition government that actually worked well and which mastered a new constitution that at least on paper is nothing short of fabulous.

Part of the agreement required Kenya to bring to justice all those responsible for the violence. A sub-agreement to that required the ICC to step in if Kenya was unable to accomplish this.

So despite all the creativity and work that Kenyans managed in creating a new society, in the end they were unable to bring themselves to charge the son of the first president, Jomo Kenyatta, who was quickly achieving national popularity especially among his ethnic group, the Kikuyu.

So the ICC stepped in as agreed and two years ago had a near irrefutable case against Uhuru Kenyatta and William Ruto, who in the meantime became freely elected as Kenya’s president and vice president.

No one believes that Kenya has either the power or wizardry to change the past, but it sure seems so. Earlier last month the prosecutor had to drop the case, because … well, there wasn’t one, anymore.

The rules of the ICC allow it to bring charges again, at any time, so technically Kenyatta has not been vindicated. Quite to the contrary, the animus of the ICC towards Kenyatta is palpable. The prosecutor has made no bones about why she dropped the case: it, literally, was stolen from her.

History has already crystalized. Kenyatta and his henchmen funded and orchestrated much of the horrible ethnic violence that followed the 2007/2008 election. In a Shakespearean twist classic to Kenyan mischievousness, most of the violence Kenyatta concocted was against the ethnic group of … Kenya’s vice president.

In a brilliant move several years ago, Kenyatta didn’t simply offer an olive leaf to his arch rival, the man who the ICC charged with being equally murderous against Kenyatta and his clans. Kenyatta offered him the second spot on the national stage.

By the way, charges have yet to be dropped against the Vice President, William Ruto, but everyone knows they will be.

Many in Kenya see this public and power alliance as retribution enough. Many in Kenya believe justice has been served and that it’s no business of a World Court thousands of miles away and culturally so dissident to judge Kenya’s recent past.

In fact, there is a growing movement in Africa to abandon the ICC altogether. The ICC is a complicated but I believe wonderful concept that has yet to win over the greatest world powers like the United States and China.

But for the great majority of the rest of the world it’s working pretty well. It’s had few convictions, but its masterful prosecutions and principle investigations have held many to account and I believe imprinted much of Africa with the need for justice.

So while even I can be convinced by the many Kenyans who believe that this horrible chapter of their history is closing, they leave one page unturned: It was they, the Kenyans, who invited the ICC in.

Kenyans themselves could have closed the book, but they couldn’t. So Kenyans themselves invited the ICC to take over. Then? Kenyans apparently connived and manipulated the witnesses and somehow stole the evidence.

That’s so behind-the-scenes, so Machiavellian, so deceptive that it in my opinion it’s immoral. No justice can come from this.