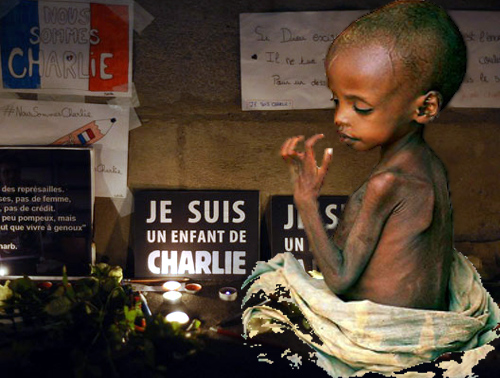 Last week an unbelievable 2,000 people were killed by terrorists in Nigeria and a believable 17 were killed in France. Are you Charlie?

At the bottom is starvation. At the top is freedom of speech. Sometimes they seem unlinked, too far apart to have any meaning to one another.

But not today. Towards the top are Charlies arguing that without unfettered freedom of speech it’s not worth eating.

Towards the bottom are the jihadists who achieve power by delivering bread at the expense of a word against them.

Progressive Africans are as divided as modern westerners that free speech is so important, but African governments are much less so.

Often African apologists like myself see eating as a prerequisite to doing anything. Richard Dowden, Director of the Royal African Society, wrote today:

“I will not be joining ‘Je Suis Charlie’… these cartoonists did not … care about ordinary sincere believers who would have been deeply hurt by the violent dehumanised images of the founders of the great religions of the world.”

Dowden reminded us that many of Charlie Hebdo’s images “came close to the sort of cartoons that the Nazis drew to depict Jews in the 1930s.”

But Kwendo Opanga writing for Nairobi’s Daily Nation says, “But, somebody please educate me: does killing me and the innocents next to me make my killer a better person and my ghost or spirit a veritable tribute to contrition?”

In developing societies there is still a lot of illiteracy and below that, abject ignorance. In America lying exploits ignorance to manipulate the reigns of power but the checks of truth are powerful, too.

Ruling against South Africa’s Sunday Times attempt to reprint Danish cartoons offensive to Islam, High Court Judge Mohamed Jajbhay explained, “Although freedom of expression is fundamental in our democratic society, it is not a paramount value.”

Jajbhay went on to explain what might be a paramount value, such as human dignity, or … eating.

When hunger and poverty is being reduced, we focus ideas and theories that distinguish humans from other animals. That was the case for much of the last 30 or 40 years.

That 30 or 40 years was a good story… unless you live outside where it’s happened.

The global reduction in poverty came mostly from China and India, little in Africa. There was some stabilization of poverty increases in Africa, but particularly in areas of conflict, poverty increased substantially.

The difference between eating and starving is not well understood by the well fed. Those who eat less in this case know much more: Starving is the fuel of jihad.

Mosul is Iraq’s 3rd largest city and remains in control of jihadists, because of the massive development it was denied by the Baghdad government in the last decade.

That same story plays out again and again throughout Africa. Nigeria’s neglected northeast state is almost entirely today in the hands of jihadists, for the same reason as Mosul.

Cartoons are abstract, food is not. The starving may want as much freedom as those who eat plenty, but they won’t know until they stop starving.

Those with a few morsels in their mouths can dream about a better life. They, too, want the freedom to express themselves, and they grow livid with the understanding that those who denied them their bread have access to so many colored crayons.

Let the ideologues argue about ideas as they munch their croissants and sip their lattes. The real debate is less arrogant, much simpler: bread.