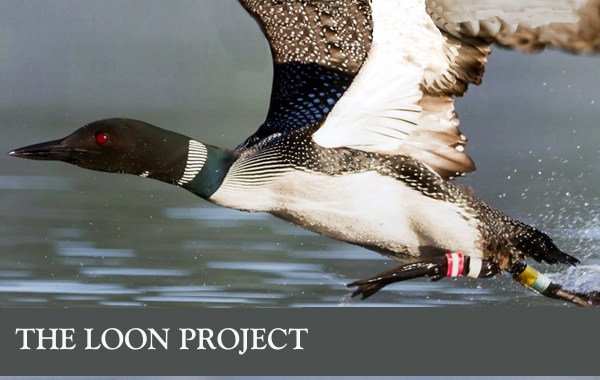 I was sitting in our breakfast room, the corner of the house all windowed, overlooking the lake when a red Corolla with a red canoe on top raced down our driveway and a tall lanky man with wading boots and a funny hat jumped out and ran to the edge of the lake.

When he raised his binoculars my concern turned to relief. I walked out barefoot in my jammies into the 45F spectacularly clear morning and introduced myself, but I all I did was manage to agitate him as he muttered, “Yellow over red. No… pink over red.”

I leaned against the tree as he continued to stare at our pair of loons that have been here on the lake for several weeks now.

“Sorry if you don’t mind,” he said to his binoculars strap but answering me, “I need to identify these.”

Several years ago Walter Piper had personally captured the two loons we were now looking at. He confirmed this when he saw the colors of the bands he’d personally strapped around their legs. You’d never know from the excitement he displayed finding this pair that he actually studies more than 120 pairs of loons in our north central area of Wisconsin.

Over subsequent coffee and stale hot-cross buns Professor Piper told a promising story of conservation, of which he and his students have become a central part.

[Gavia immer] is listed as stable and “least threatened” in North America by the IUCN. But this was not always the case.

Just as DDT massacred the eagle it had a devastating effect on loons. Banning DDT led to the population rebound. Then, some twenty years later a second blow came with mercury.

That was when Prof. Piper first became involved. Wisconsin state officials linked up with loon field scientists like Prof. Piper to monitor mercury levels in the bird, which eats the fish that capture mercury.

Laws were then passed that required mining and power companies to clean the mercury out of all emissions. The loon population rebounded once again and multiple conservation projects like the one led by Prof. Piper have kept it that way.

One of the Loon Projects’ principal goals is to educate local Wisconsin folks about the importance of loons to their lives. Prof. Piper’s more than quarter century dedication to the bird has helped restrict ecological toxins and reckless leisure water use not just by passing needed laws but by convincing residents of the benefits of doing so.

There are few creatures in the universe with calls as piercing and haunting as the loon’s. Ojibwa peoples believe it was the reason man invented the flute. Western native peoples believe it leads the spirits back and forth between modern and prehistoric worlds, and Alaskan tribes believed it could cure blindness. Many local Alaskans today still refer to the common loon’s cousin, the red-throated loon, as the “magic bird.”

But its oddities extend well beyond its eery voice. Similar with an albatross, walking is near impossible making nesting a special challenge. Males peak at 6-7 years old and are usually dead by 15, but females live for decades.

Prof. Piper and others have focused much of their studies on the unusual natural selection behavior of loons which in some ways is not so different from some aggressive spiders! Males often fight to the death to control a territory.

I asked him if that might be because of reduced habitat, but he dismissed that out of hand certain there is plenty of undeveloped good loon habitat. That means violent loon duels must be a successful survival mechanism, and at this point we started to differ on whether that should be interpreted strictly individually or on a species level.

Piper believes that younger loons scope out breeding pairs before they breed themselves, and actually are able to register the attractiveness of a territory by monitoring chick survival in various territories.

Piper has data suggesting these floaters, mostly younger birds not yet paired to mate, will then at the beginning of subsequent years challenge the established males in breeding pairs with greater chick rearing success.

Unlike most species and not only birds, male loons actually take more responsibility rearing chicks than the females. If there is plenty of unexploited good habitat, this complex behavior of newer, younger males “fighting to the death” to displace a successfully breeding male seems not only unnecessary but counterproductive to the species survival.

Natural selection doesn’t anticipate the future by hedging bets, but exploits the moment. This unusual machismo battle in loons strikes me as a sort of premature natural selection and why it therefore developed remains a puzzle.