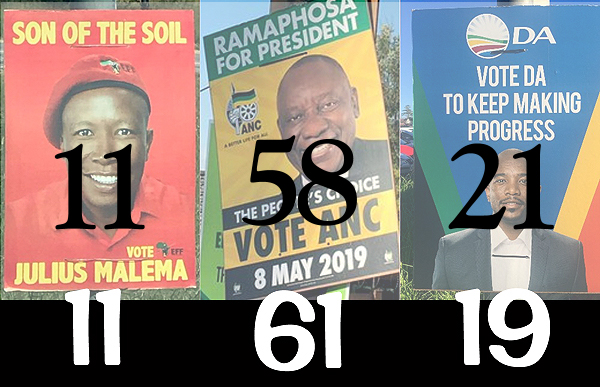 Change is on the way but it’s a long way ‘comin.

That’s what the South Africa election tells us and not only about South Africa but for all the world’s democracies.

The relative powers that existed before the South African election are the same today, while registered voters fell below 50%, “even [below] the famously low-turnout US.”

The before and after percentages: ANC (62/58), DA(22 /21), and EFF (6/11). You don’t need to know what those anagrams stand for to understand that the “ANC” still rules but less strongly, that the main opposition is a wee wee bit more powerful because it didn’t erode as much as the ANC, and notably, that the outlier is much less so.

Let’s transliterate this into the American election:

Trump-Republicanism doesn’t stay in power, not at all. It means that status-quo America stays in power, and that means Biden. Trump Republicanism is not American status quo.

It means that conventional Democrats, “moderates” will slip a wee wee bit, replaced by the Sanders/Warren/OCA youth that emerge more powerful than ever.

In the end in America as in South Africa – as I think in democracies worldwide – not much will change (except one really significant difference-see below):

Specifically to America, though, there will be a lot of major superficial changes because Trump-Republicanism is so unique:

A slew of executive orders will be reversed, thousands of employees will be sent scurrying, the foreign service and the EPA and the Education Department will be excruciatingly and with enormous difficulty rebuilt, Obamacare will be reenforced, and civility will ultimately return to governance.

But none of that bodes substantive change. The table may be reset for change, but change remains a long way ‘comin.

Let’s transliterate this into the rest of the world:

Conservative movements abate. Climate change becomes the glue that begins to cement the new more rational world together as even divergent societies bind together to fight it. Trade policies return to the 2000s. Sustaining world peace shifts back to old ways: mutual deterrence, harshly tempered alliances and quid-pro-quos that govern the day although often in deeply classified ways.

Except for one very important thing (see below)… not much fundamental difference between those who benefit and those who suffer in all the world’s societies.

South African pollsters converged on the following prediction before last week’s vote: ANC 61, DA 19 and EFF 11. The upshot is that the polls were remarkably accurate.

The painful argument emerging today from South African thinkers is that elections are determined long before people go to the ballot box, and that the media has an increasingly role in this outcome.

(The reason the media has such an important role today is because it’s doing its job better than ever. Don’t rack that up to necessarily more talent. It’s mostly to do with better technology.)

People know this. So they express their pre-vote opinion to pollsters, in town halls and on social media, and that opinion becomes determinative.

There are a multitude of reasons why someone doesn’t register to vote. There are only two reasons that someone registered doesn’t vote: [1] they don’t care; or [2] they’ve decided that their passionate choice isn’t available or can’t win.

Both reasons grow easily from a world where the future is so predictable. So what may in fact be a slim victory if a snapshot opinion is taken grows in the time between that snapshot opinion and the actual determinative event.

That’s not necessarily undermining democracy, it’s just hastening it, and more importantly, hastening the reactive decisions as opposed to the long-thought out decisions.

That’s the world, today. Sick and tired of the squabbling, fighting and lack of civility: ‘Let’s get back to the days when there was less of that. Later we’ll talk of justice.’

(This is “below.”)
You can’t auger societies so extremely in and out of conservative/national backlash without some major disruption, and that will be the economy. Heading back to the past won’t happen without a major global economic downturn.