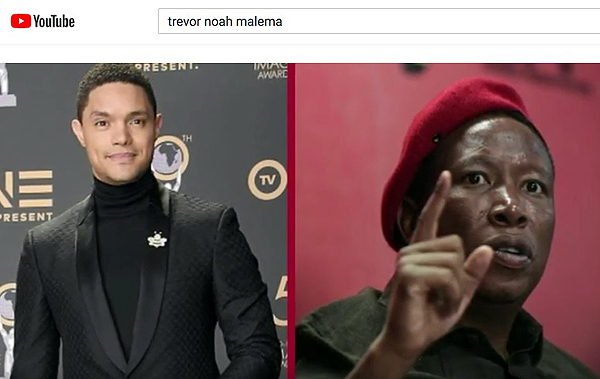 Trevor Noah isn’t so funny, anymore, and I find it kind of weird saying so. He’s a Sowetean comic in the United States and I’m an American blogger of South Africa.

We came to blows after his recent rendition of the South African election and one candidate in particular:

Six days ago just after the South African election was over Noah mocked Julius Malema, the leader of the third largest political party in South Africa. (There were 46 parties, so being third is substantial.)

Malema was also the only major candidate who grew his party rather than saw it diminish, and he did so rather impressively, nearly doubling its power.

I didn’t watch that Daily Show, but I tried my darndest to see that segment, but Noah has removed it from all its normal places: YouTube, Twitter, Hulu, etc. Shortly after it aired South Africans of every stripe and color massively criticized him. He’s obviously trying to bury a mistake.

The only clips I saw were ones that South Africans captured before they were removed. In those Noah compares Malema to Donald Trump. A longer set of clips (move to 16:01) was captured by popular American YouTuber, Afrikan Esq, who was equally critical of Noah.

Remarkably, the only person who didn’t criticize him was Julius Malema himself: “We love Trevor Noah. We’ll continue to laugh at his jokes. He’s doing well; he’s our brother.”

“While some people have stated that Noah should be pardoned because his is a comedy show, one understands too well that beyond comedy, a narrative is being rewritten – and South Africans will not take it,” the well respected and very politically moderate Socrates Mbamalu wrote from Johannesburg several days ago.

What’s the narrative that Noah is writing?

“..the negative tropes about the continent which Noah is dishing out reinforces certain long-held myths about Africans. Referring to Malema as a white genocidaire serves to reinforce Trump’s statement about the killing of white farmers,” Mbamalu explains.

Julius Malema is not anything like Donald Trump. For one thing he’s a lot smarter. For another thing he’s no pawn of Russia or special interests or the banks to which he’s indebted. Malema is a firebrand to be sure, and that may be the only thing they share.

But Noah’s comparison skidded off the rails when he took clips of Malema massively out of context, like the one sending a journalist out of a press conference with the shout “Bastard!” or a snippet of an interview when Malema said, “We are not going to be killing whites,” edited into a subsequent snippet, “at least for now.”

Noah violated almost all rational journalistic standards in that terribly unfair and misleading montage, something we know you can do with any public figure.

I’m no fan of Julius Malema. Believe it or not I think his policies go too far: from the socialism I espouse to the communism that exists without accountability.

But boy do I respect him a lot more than Trevor Noah. The man is a studied politician, an academic of history and he has captured a growing populace in South Africa which to their credit chooses Malema’s brand of communism over the strong-man ideologies of Erdogan, Mugabe or maybe even Trump.

An on-air apology is necessary. Nothing less will get me or millions others to watch him again.

By the way, I did chuckle at an earlier Noah snippet about the elections before they happened, comparing African witchcraft (click here) to CNN polls. Then funny, it now seems offensive.