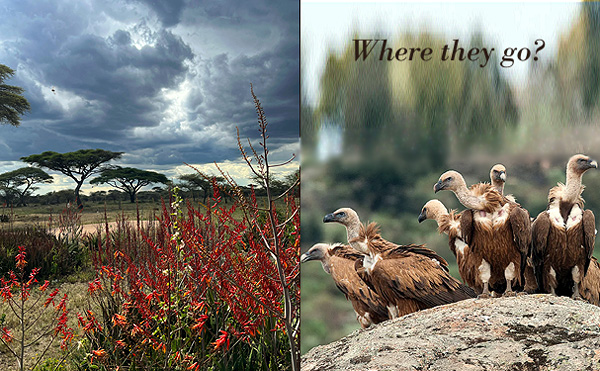 Hundreds of vultures. Mounted on the acacia trees, flying between the patches of thick forest, landing and taking off from the meadows within the woods. So we plowed back and forth through the high grasses trying to discover what they were scavenging. What dinosaur could bring so many birds together?

Radioing back and forth between our rovers we covered almost every inch of open ground and could find nothing, even as the shadows of their huge wings slipped back and forth across us. What was going on?

This safari is very unusual. We’re spending eight of our 13 days in Tanzania just in the Serengeti, zigzagging from its very south to its very north, truly “Chasing the Herds.”

So far everything’s exactly as expected, normal. Which, of course, isn’t normal anymore with climate change. But for us the gods rolled back time and let us see how it always was.

Sam Epstein who took the beautiful photo on the left commented that the landscapes looked like distant painted deserts. But it was no lovely pastel mixture of old rocks, but of red and black volcanic hillsides, and endless rolling hills of purple, yellow and little pink wild flowers!

The rains don’t switch off like a faucet. There’s a downpour in mid-May, then a week dry, then some steady showers, and pole-pole (slowly) it stops raining altogether. We’re in that marvelous transition period.

The rains were continuing when we were in the crater. That made it really, really cold, but the veld was gorgeous and there were thousands of animals grazing peacefully. Now we’re at Ndutu in the far southwest corner of the Serengeti where the rains are sputtering to an end.

Exactly as is normal.

And exactly as is normal the 2½ million animals that spent the last four months grazing here on the nutrient grasses have left. And I figure they left quickly, freaked by just a few days’ stretch of no rain.

So we were game viewing east of our lodge along Lake Masek down towards Ngorongoro and the Keskesio valley. This is the route normally taken by the great herds when they leave the crater area. We were doing it backwards.

As normal for now no great herds. But what a beautiful veld they left behind. Stretches of iridescent green grasses newly sprouted by showers that came after they left, patches of black cotton soil in the korongos (ditches) reflecting a bright sun, and with binoculars we could see that the hundreds of thousands of animals here only a month ago had been replaced with Maasai and their herds. Even that was newly colorful as apparently L.L. Bean’s blue and red tents are now the preferred nomadic accommodation!

When the great herds are here there are usually pools of water all over the otherwise flat veld. Still the best drinking is from Lakes Masek and Ndutu, and the shores of these beautiful long lakes provide the salt that’s also necessary for an antelope. So normally the herds of likely a million animals spend almost all their time grazing on the prairie flats, but then they wander through the Ndutu area for better water and salt.

So for four to five months it’s an endless Thanksgiving dinner for the predators and scavengers of Ndutu.

So then it hit me.

All those birds, more vultures together than I’ve ever seen, hadn’t a spot of blood on them. The white-backs looked like they just came from the spa: Feathers all perfectly in place, no gimped wings from duking it out for the best morsels.

The great lappet-faced were crowded within the white-backs and Ruppell’s, something you never ordinarily see. Their beaks are designed to rip out the marrow from the bones and they can’t do that until the bully white-backs are done.

Ordinarily the diminutive Egyptian vulture looks so beat up at a kill that you wonder how it manages the energy to swallow the lucky bit found. But my lord there they were posing side-by-side with their nemesis white-backs!

The birds were being so polite flying back and forth from tree to tree, there were none of the usual collisions that always occur in the battle for the kill. And there was no cackling at all! The grunted cackling of vultures at a kill is like a meat-grinder chewing up beef hide. In fact the whole scene reminded me of a massive flock organizing itself for a church service!

Hilarious. Day after day after day they had feasted on the wilde right here, in the corridor into the Ndutu forest, the gate to the better waters of the lake and the salt edges. Here they waited, the lions and hyaenas killed, and they cleaned up the bar room feast.

But … the herds had disappeared. One Ruppells perched unusually alone on a rock looked back and forth, back and forth. Where they go?